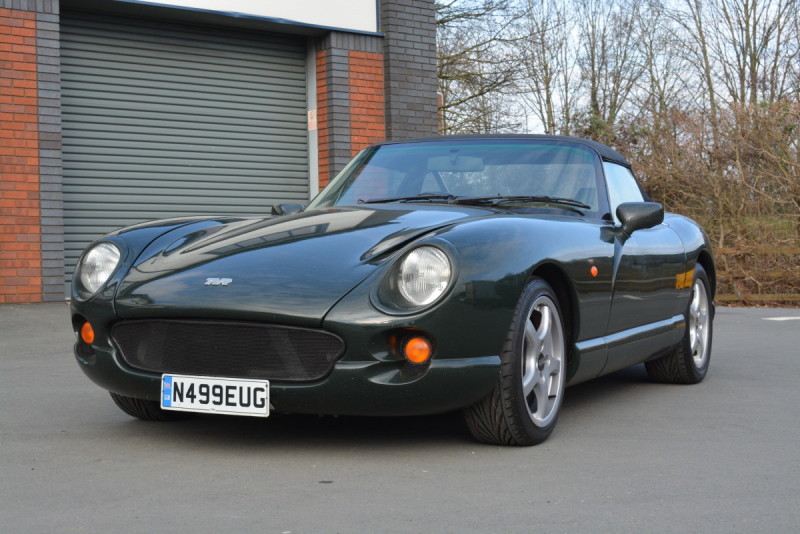 At a featherweight 1,060kgs, the TVR Chimaera derived its performance from more than just brute force, although with up to 285bhp on tap it had plenty of that too.

Based on a contemporary Griffith chassis with a slightly more spacious body designed with more comfortable touring in mind, it was replaced by the rather extreme and less popular Tamora. It was pure TVR and used a TVR power version of the Rover V8 with 4.0, 4.5 or 5.0-litre alternatives.

First registered on the 8th February 1996, this 4.0 litre 240bhp TVR Chimaera has 72,000 miles on the clock and a solid service history behind it. Its current registered keeper has owned the car since 2007 and there is a considerable history file since that time.

The car has always been serviced by TVR or performance car specialists and has been well tended to. In 2007 it had attention to the under-body areas and was waxoiled. In 2008 it had a hot-start kit fitted and a new rear screen. The following year it had a smooth-bore induction kit and new air filters and in 2011 new exhaust manifolds and engine mounts. A year later the camshaft was replaced - all this being carried out in addition to routine servicing - details of which are on file.

For more information on this lot please go to: https://www.brightwells.com/lot-details/100012278.