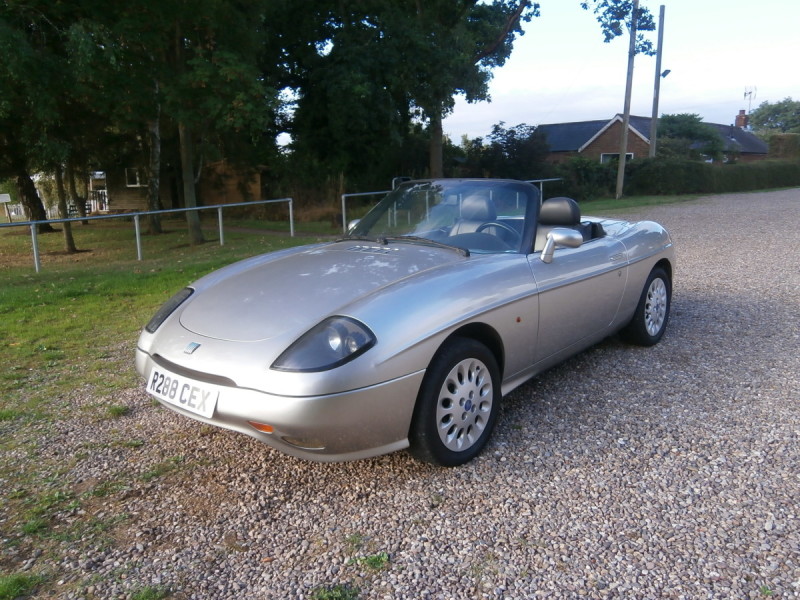 Launched in 1995, the Fiat Barchetta was a delightful little roadster with lithe, swooping bodywork designed by Andreas Zapatinas.

Partially hand-built, it was packed full of those lovely design details that the Italians do so well, such as the cowled Ferrari-esque headlights and recessed tail-lights, flick-out door handles and cute boat-tail rear.

Only available in left-hand drive, it was powered by a 135bhp 1,750cc twin-cam engine with variable valve timing that endowed the car with very sprightly performance – 125mph with a 0-60 time of 8.9 seconds. It remained in production until 2002 but was re-launched in 2004 for one year only.

First registered in January 1998, this smart rag top is finished in smoke silver with black hood, anthracite leather interior and lovely multi-hole alloy wheels. The car has had just six owners, the current since March 2008 who have clocked up a modest 80,200 miles.

The car’s history file includes the V5C and a few invoices showing the car had a new clutch and recon’ gearbox fitted in September 2019 by Nicol Engineering of Kidderminster but not much else. The car will be treated to a new MOT in time for the sale after some time in storage.

A cracking alternative to an MX-5 with far more flair and peppier performance, they also boast a bigger boot and are far less common on the roads, we love ‘em.