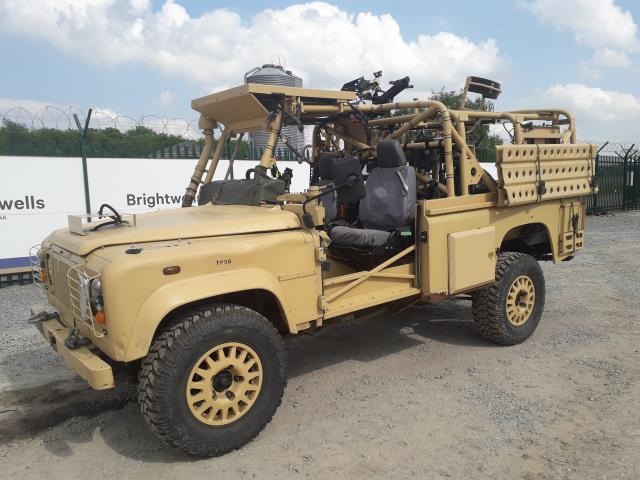 The Land Rover Defender Wolf was a long-time favourite vehicle for use in theatre or on domestic duties, as far as Her Majesty's Ministry of Defence Buyer were concerned. After a major re-fleeting of Land Rovers in the late '90s, different variants came to the fore in the attempt to accommodate war zones in unique global situations and the expanding types of warfare that the military were beginning to be faced with.

Certain situations called for a vehicle that would undertake reconnaissance or be the support for artillery platforms that needed to get close to enemy positions. The Wolf was considered to be agile and yet tough enough to fill this role, so the design needed to protect the soldiers would need to carry out this role. WMIK (Weapons Mounted Installation Kit) was to be one of the variants that would develop for this function and Land Rover hooked up with Ricardo Vehicle Engineering to produce them, with the RWMIK+ being a version of which is before you here – the R purportedly stands for Revised.


The original vehicle in service would have supported up to two machine guns of varying capabilities, as can be indicated from the remaining infrastructure, but we cannot be sure what was originally fitted to this particular model. What you have here, though, is an eye catching example of some of the most recent vehicles from the British Army. The condition report is well worth a look.


There are several conditions we ask buyers to meet, when purchasing items from HM  Ministry of Defence. Passport ID is required for MOD approval before collection. For clients wishing to export - Export Licence required. VAT at 20% will be added to the sale price of this lot.  A Buyers Premium will be charged at 12% plus VAT on the sale price and added to your invoice.
We remind buyers that this lot is subject to an EAR/ASSC rating, the details of which will be provided to the purchaser and will be subject to the purchaser’s approval to accept, due to export controls.


This vehicle will be available for collection from our Brightwells Site at Stoney Street, Madley, Herefordshire HR2 9NH