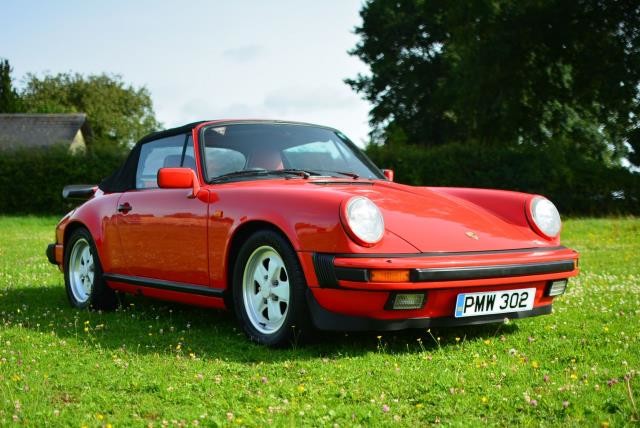 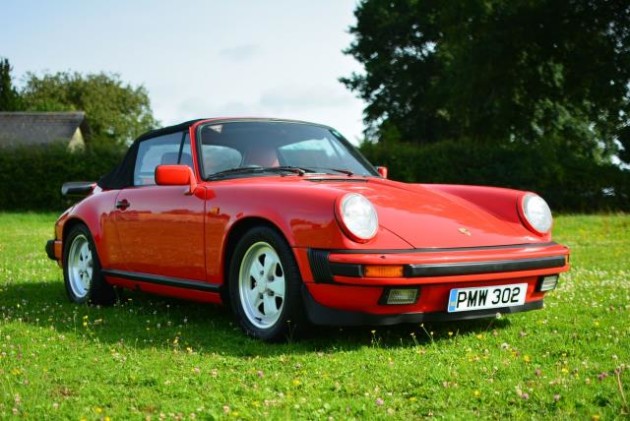 Showing just 89,361 miles and finished in Guards Red with red leather Sports seats this is a proper 80's icon. Ammendment.

Supplied new in February 1985 by Merlin Porsche of Chatsworth to its lucky first owner, this attractive cabriolet has been in the current ownership since June 2009. Finished in desirable Gaurds Red with Can-Can red leather interior and carpets, black hood, Limited slip-differential, spoilers and forged alloy wheels in Grand Prix White it very much fits the 80's red braces/stockbroker look and we love it for that. The interior features deeply bolstered Sports seats piped white with electric adjustment, optional cruise control and top tinted windscreen. The binnacle looks, like many Porsches of this era, to quote a Clarkson-ism "as though you’ve stuffed all the knobs, dials and buttons into your nose and sneezed, such is the apparent disorder that somehow magically just works". Showing just 89,316 miles, this 3.2 Cabriolet could easily be described as ‘low mileage’ for this age of Porsche with most having covered well over the 100k mark. The 911 has seen little recent use, sat idle in storage in North Devon for the past couple of years it has recently been pulled out and treated to a new battery and check over at a specialist in Gloucestershire who built the modern, bespoke ECU with Bluetooth for wireless connection and diagnosis The car is due to have a fresh MOT all being well in time for the sale and would no doubt benefit from some regular use and a thorough service. We note the electric windows do not currently work, although we spotted a relay missing under the bonnet which may be connected. The hood is however manual in operation and very simple to operate. The history file includes a tome of invoices showing limited use over the last ten years including a service receipt from 2016 at 89,054 miles by a recognised independent specialist who also carried out a repair to 1st gear with replacement dog teeth, synchro ring along with a new speed sensor and battery in September 2010 at 85,399 miles at a cost of £1877. In addition to the £7950 then spent on restorative work to the chassis panels, L and R kidney bowls, inner and outer sills, B-posts, nearside front wing and subsequent paintwork along with engine removal and replacement of the clutch plate, oil hoses, brake hoses and a major service at 85,399 miles. Yet another £1418 spend followed in September 2012 at 86,659 miles for an annual service , rev counter repair (carried out by 3rd party) and replacement light switch. Another £871 was spent on the annual service in 2014 at 87,896 miles including a replacement starter motor, and oil gauge level sender. Another details a replacement oil cooler, pipes and torsion bar in October 2009 at a cost of £663. Also in 2009, the entire exhaust system was replaced with a system supplied by Design911 whilst the vehicle was serviced at a cost of £1707.52. Also in the history file are 6 old MOT certificates, laminated service history chart (detailing all works carried out from Jan-93 to Sept-08 from 59,966 miles to 83,921 miles), the V5C and Certificate of Authenticity from Porsche confirming the build date and original spec with options. These air-cooled 3.2 models have been rising stars of the past few years with many well into the £30-40K+ bracket with an upward trend and look to continue their trajectory which makes this cabriolet look particularly attractive given its mileage, condition and history of spend on the car. Who doesn’t love an old 911 anyway?

AMMENDMENT The Porsche was presented for an MOT late and failed on emissions, a bulb and a blocked washer nozzle but the vendor has run out of time to address this before the sale so there is NO fresh MOT on this lot as hoped for.