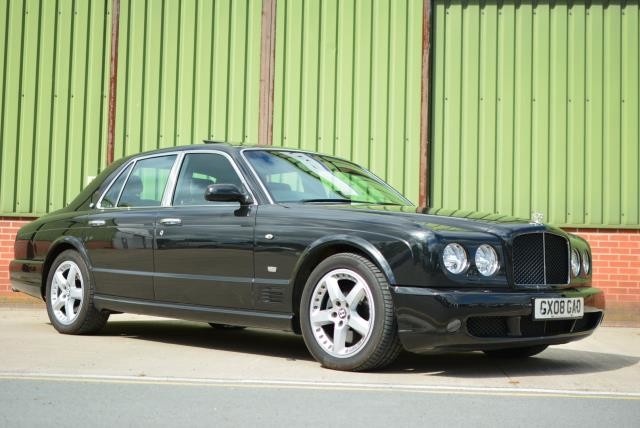 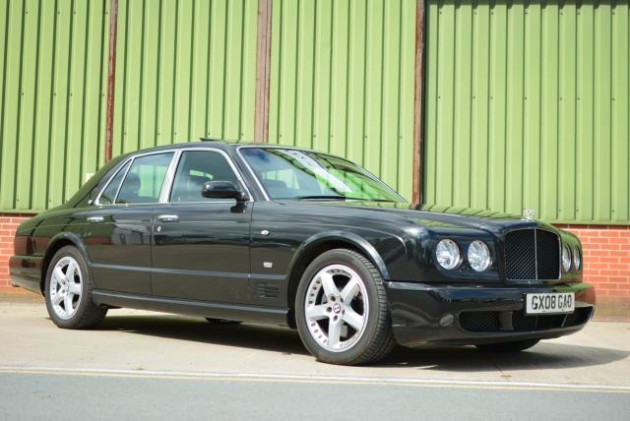 Dating from March 2008, this smart Arnage T benefits from the MY2007 updates, including new six speed ZF ‘box (as found in the then new Continental GT Coupe) new low inertia (faster spooling) Mitsubishi turbos (replacing the old Garrett units), and increased engine capacity up from 6750cc to 6761cc resulting in a staggering 500Bhp and mind bending 1,000NM of torque, enough to propel this ‘Blenheim Palace on wheels’ to coin a Clarkson-ism to 180mph and hit 60mph in 5.2 – quite something for a 2.6 tonne machine! Finished in Diamond Black Pearl (9560115) with supple black Beluga hide interior with eye-catching diamond pattern Portland stitching, suggesting the car is a Mulliner spec model, and as such featuring an even higher specification. All Arnage’s have a tremendous spec but we note here electric heated rear seats, lambs wool over mats, drilled pedals, body coloured lamp bezels, sunroof, Bluetooth, electric heated memory front seats with adj. lumbar, Bentley embossed interior, engine start button, sat nav, remote control for the in car entertainment unit, cruise control, air con and Mulliner badging and piano black trim. This five-owner T has covered some 92,853 miles with a file of history and stamped service book showing it was supplied new by Harwoods of Pulburough and ordered by them as the dealer demonstrator according to a vehicle information statement in the file. The service book includes the PDI inspection stamp at 53 miles plus eight stamps plus one hand written entry. The last stamp by Bowling Ryan Ltd, an independent RR & Bentley specialist in Bolton 90,081 miles in May 2018 costing £625. Invoices on file dating back to 2015 show regular maintenance including £1986 spent on pads, rear suspension spheres and new rear strut by P&A Wood in 2014, a major service in 2014 costing £975, an alternator repair in June 2016 costing £607, and repair to the gearbox oil cooler in 2015 costing £540.89 and two new tyres in 2018 costing £400. The car’s MOT expired earlier this year in January 2020 so will require a fresh MOT before its used on our roads again.