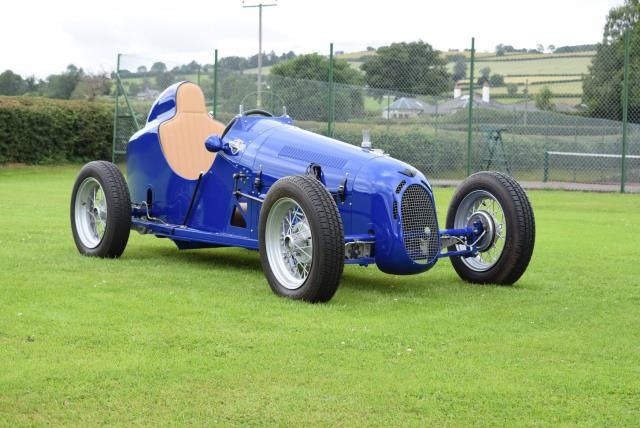 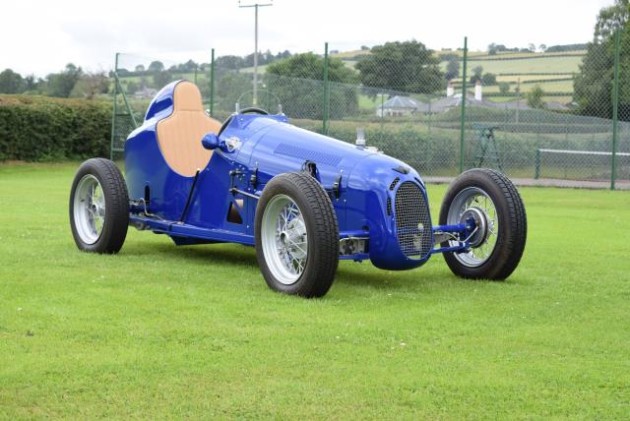 We have no paperwork with this fabulous car, so it is down to the photographs to do the talking.....there is plenty to say.

It has clearly been built regardless of cost and has been very carefully thought out during the process. One of the problems building single-seaters from conventional road cars is getting the driver low enough in the car. Alfa Romeo used the split transmission in their ground-breaking P3, while later in the same decade, Austin used an offset engine, transmission and rear axle to achieve the same low seat position.

The builder of this car has incorporated this layout, a major undertaking and in this case beautifully executed. A nice remote gearchange completes the effect.

The chassis has been fully restored, the axle too as it is fully offset. The springs are flat - giving a real ground-hugging stance and everything is very well finished in blue livery.

The bodywork is in aluminium of course, again very nicely executed and finished, with an easily removable seat to gain access to the professionally made tank in the tail.

The proportions of the car are spot-on, with a clever front cowl design based on the works twin-cam racers. The car sits on 15" tyres and refurbished wheels.

The engine has been professionally put together with a pressure-fed phoenix crank and rods, oil filtration and a brand new aluminium head. Aspects such as the throttle linkages etc have been beautifully engineered. It has been fitted with electronic ignition which is about the only aspect we can see that the VSCC might take issue with for eligibilty, but there are plenty of other series out there such as the 750 motor club who may not bother with such trivialities.

The car has probably only run for 20 minutes or so and so will require a good shakedown and set-up, but it is all there and all good to go. Obviously its build cost would be at least twice the modest catalogue estimate. If you have ever fancied having a go at some sprints, hillclimbs or circuit racing - this is it!!