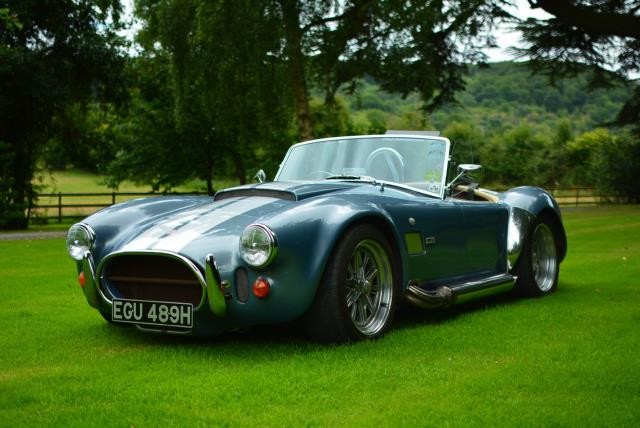 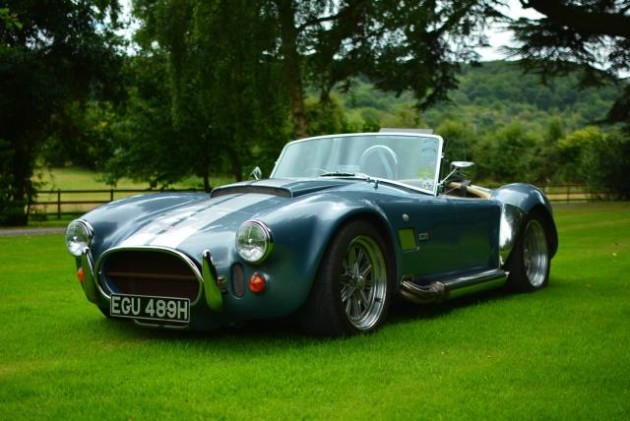 Tidy Cobra replica built by one of the most recognised brands and powered by a John Eales (J.E Developments) 4.6 V8 with LT-77 'box - fast and glorious!

Dating from July 2006 this exceptional Dax Tojeiro Cobra has been with out enthusiast vendor for the past four years during which time he has thoroughly enjoyed his tenure seeing various jaunts to Goodwood, Le Mans and a host of classic and sports car shows at which its been very much admired. Purchased by our vendor from specialist dealer Sovereign in Hampshire in late 2016 the car is of course one of John Tojeiro’s Dax Cobras – he of the AC Ace design fame of course. The car is finished in the attractive hue of Shelby light metallic blue with light silver Le Mans stripes, tan interior, grey carpets and leather cockpit surround. Engine wise, we see here the cherry atop, it’s a J.E Developments alloy 4.6 V8 – John Eales is considered the bees knees when it comes to the Rover V8 – potent being a mild way of putting it. It features large valves, 518 road-race cam, Edelbrock 500 carb, Edelbrock Performer intake manifold, Edelbrock air cleaner and rocker covers, stainless headers, Petronix Flame Thrower distributer and Flame Thrower coil and Magnecor Racing silicone HT leads. The ‘box is an LT-77 5-speed ‘box. The tantalising spec goes on to include the factory option of extended foot wells to suit the taller driver an attractive Motolita timber rimmed steering wheel, Willans 4-point harnesses, emergency battery cut-off, Hallibrand style 17inch alloy wheels, large 4 into 1 stainless side pipe exhausts, P700 headlamps, chrome front and rear over-riders and bars, Brass Craft glass wind wings and sun visors along with a half zip Tonneau cover, hood and side screens for wetter weather. The history file includes The V5C, a current clean MOT valid until December 2020 and a ream of invoices, spec sheet, purchase receipt from 2016 at £32,000 at 9,355 miles, ten old MOTs confirming its covered approx. 13,000 miles in total with an odometer change due in 2017. Also on file, is the original order for the chassis placed in 1999 showing extended footwells and then the Dax Tojeiro body order in late 2001 with delivery scheduled for early 2002 from Dax cars along with a selection of thick tomes from Dax including ‘SVA Guide’, Dax options and price list and assembly guides. Invoices on file show regular maintenance and parts purchase including a recent replacement NSR output shaft in May 2019, lube service and carb set up in March 2018, pair of tyres in February 2017, exchange brake 4pot calliper in June 2010. A repair to the 5th gear synchronising hub and synchro was carried out in May 2015 costing only £216 by B.K Transmissions of Hampshire and also fitment of a Cat 2 Laserline immobiliser system in June 2015 to mention but a few. A quick and very usable example in super order with all the noise, presence, looks and performance you might wish for. Very cool indeed.