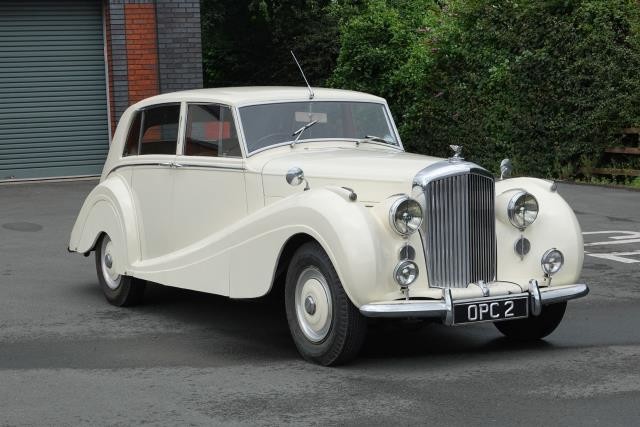 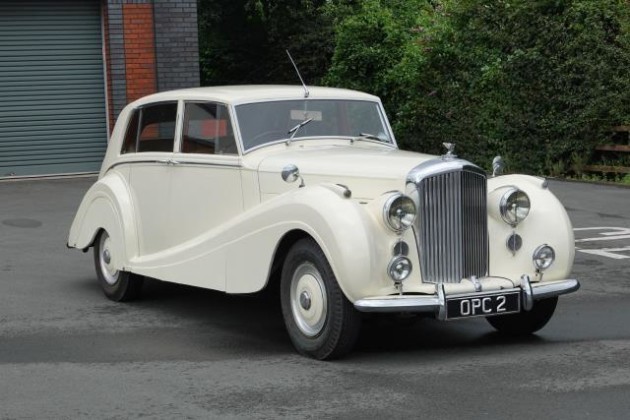 From a deceased estate; few owners, the current for 47 years; well-maintained with large history file; valuable number plate; lovely patina and runs like a Swiss watch

Launched in 1946, the MkVI was the first post-war Bentley to come out of the Rolls-Royce factory in Crewe – which had been flat out for the previous six years making Merlin engines for the war-winning Spitfire. Power came from a beautifully smooth 4.25-litre straight six engine with twin SU carbs and aluminium cylinder head that was good for 95mph. Drive was sent to the rear wheels via a four-speed manual gearbox (floor-mounted to the right of the driver) with single plate clutch. Servo assisted drum brakes provided the stopping power while suspension was independent with coil springs. The MkVI was eventually replaced in 1952 by the long-boot R-Type saloon. Most of the 5,200 MkVI models produced were factory-fitted with a Standard Steel Saloon body that cost £2,997 at launch, but around 20% were individually bodied by coachbuilders such as HJ Mulliner, Park Ward and James Young with prices from £3,500 to £4,000. The chassis alone cost £1,785. This particular car is one of around 100 Mulliner-bodied MkVI saloons with the graceful semi-razor edge styling that was just coming into fashion at the time. Considerably lighter and stiffer than the Standard Steel Saloon, it benefitted from the aircraft construction techniques that Mulliner had perfected during the war years, with much of the framework in cast aluminium and most of the outer panels in aluminium sheet. As a copy of the original build sheet confirms, chassis B494FV was completed in October 1949 and despatched to HJ Mulliner of Fulham where it was fitted with Special Six Light Sports Saloon coachwork with a Tan leather interior. Originally painted Black, it was almost immediately repainted in two-tone Sand over Sable. The finished car was delivered to first owner Dudley C Page of Weybridge via G Kingsbury & Sons of Hampton in March 1950 with the registration number OPC 2 which remains in place to this day. The original buff logbook shows that Page kept the car until 1958 when ownership transferred to Edward Russell Lloyd of Burton-in-Wirral and then in the mid-1960s to Dr JC Macaulay of Shrewsbury who kept it until March 1973 when our vendor acquired it from Wrexham Road Garage in Whitchurch – so it has effectively had just four owners from new, the current for 47 years. A good file of invoices from 1965 onwards detail meticulous upkeep over the years including an engine overhaul by Bentley Motors of Crewe in April 1965 when a new set of pistons were fitted. In 1978 the car was sent to Scott-Moncrieff of Leek where it received a full bodywork restoration and a bare metal repaint in white. The headlining was also replaced using West of England cloth, the interior woodwork refurbished, much of the wiring renewed and the rear lights modified to incorporate flashing indicators. In latter years the car has been maintained by Broughtons of Cheltenham, the most recent service being in April 2011 which included a brake overhaul and a new master cylinder since when the car has only covered around 800 miles. Always kept garaged in the current ownership, the car appears sound and straight, the doors open and close nicely, the interior is mainly original and is pleasingly worn. The paintwork is past its best being somewhat microblistered here and there, but that could be just the excuse you need to return it to its original Sand over Sable colour scheme. A much-loved family member, OPC 2 has always been in light regular use, including tours of France and the Scottish Highlands and has provided suitably regal transport at various family weddings. Very little used in recent years, it nevertheless started promptly and ran like a Swiss watch as we moved it around for these photos, although a precautionary check-over would be advised before any long journeys are undertaken. On offer here from a deceased estate at a very modest guide price, this rare coachbuilt Bentley comes with a good file of history and a very eye-catching number plate which is transferable and doubtless has a substantial value of its own.