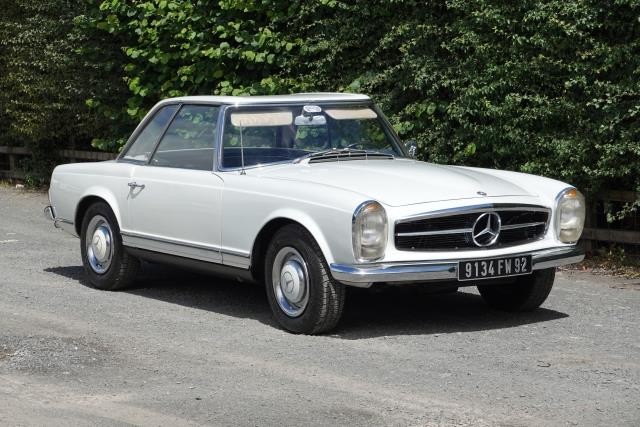 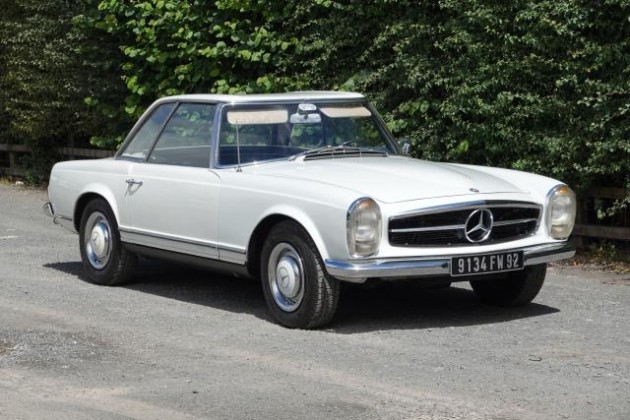 Dating from 1964, this 230SL Manual had just one French owner for the first 13 years of its life, one Bernard Corouge of Mont La Ville, a small village 40 miles north of Paris. He clocked up 56,000km in the car (34,800 miles) with a good file of invoices charting upkeep during this time (all in French, naturellement). In April 1977 he advertised the car for sale at 17,500 Francs and it was bought by an American gentleman living in Paris, one Ralph W Drayer. Three months later, Drayer returned to Waynesboro, Virginia, and had the car shipped over to America ahead of him. Drayer was to keep the car for the next 42 years, adding only 18,600km to the odometer which currently shows 74,600km (46,400 miles), as confirmed in documents on file. Invoices show that he had the car smartened up on arrival, including new bumpers, a new hood and a repaint of the front end. Other invoices attest to regular upkeep over the next few decades, all servicing from 2009 onwards being carried out by Sea Island Auto Service of Hilton Head Island, South Carolina. Our vendor acquired the car in 2019 and had it shipped back to England earlier this year with all duties paid. It has not yet been UK registered for the simple reason that DVLA is in some disarray at the moment and it is taking longer than usual to get all the paperwork sorted. However, both the NOVA document and the original US Certificate of Title are both on file so the new owner should have no difficulty getting it registered using the requisite DVLA form. Finished in its original white with a blue vinyl interior (including rear child seat), this low mileage, matching numbers, two-owner Pagoda remains in good and highly original condition throughout. Much of the paintwork appears original and is therefore somewhat dull in places. Perfectly acceptable as it is, it would be transformed by a respray. Starting promptly and running nicely as we moved it around for these photos, it looks mighty tempting at the sensible guide price suggested.

We have just checked the soft top on this car and it is navy blue and looks virtually new and unused. For more information please contact James Dennison on 07970 309907 or email james.dennison@brightwells.com