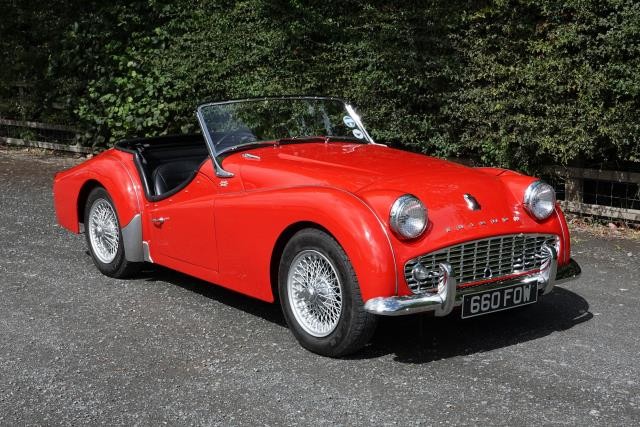 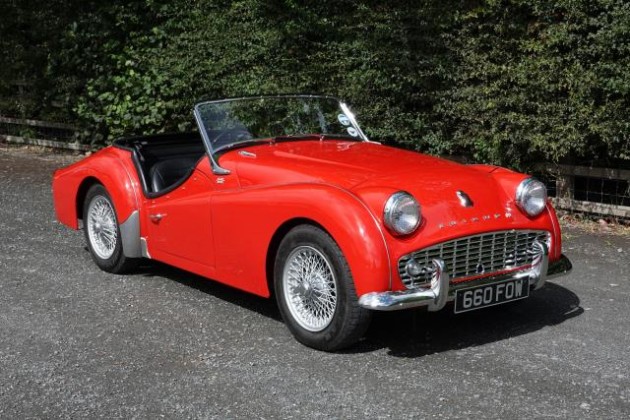 Amendment: Car is from 1958 and not 1964 as previously listed. Multiple concours winner in excellent condition throughout; fully restored nine years ago; only 4,000 miles on rebuilt, balanced and lightened engine; galvanised chassis; TR4A overdrive gearbox; find a better one!

The quintessential British sportscar of the Fifties, who doesn’t love a Triumph TR? Powered by a virtually indestructible 1991cc 4-cylinder, wet-liner OHV pushrod engine, the gutsy TR2 was capable of a genuine 100mph. Not only that, in its 1954 road test, The Motorcar praised Britain's lowest-priced ton-up car for returning 'astonishing fuel economy' of 34.5mpg over 1,904 miles. The TR2 was replaced by the TR3 in 1955, now with 100bhp on tap (5bhp up on the TR2), front disc brakes and the option of an overdrive unit on the top three gears, electrically operated and controlled by a switch on the dash. The final evolution of the line, the TR3A was introduced in September 1957. It differed mainly in having a wider front grill, exterior door handles, a lockable boot handle and a full tool kit as standard. Great fun to drive, its tough boxed section chassis featured independent coil and wishbone front suspension, a leaf sprung 'live' rear axle and disc / drum brakes. Now with some 104bhp and 117lbft of torque, it could sprint to 60mph in 10 seconds on its way to a top speed of 109mph. It was replaced by the more Italianate TR4 in 1961. This stunning TR3A dates from October 1958 and was originally a LHD car that is thought to have been first owned by an American serviceman based in Germany. Returning to the UK in March 1964, it has had five owners since, our vendor acquiring it in April 2010. Over the next two years it was treated to a total nut-and-bolt restoration with the spectacular results you see today. The extent of the work carried out is too detailed to list in full here but is amply documented in dozens of invoices on file. Mechanical highlights include: full engine rebuild by Worcester Classic Cars with new pistons etc, lightened and balanced and converted to run on unleaded fuel; alloy sump; upgraded rear crank oil seal; electronic ignition; rebuilt TR4A overdrive gearbox with synchro on all gears including first and overdrive on 2nd, 3rd and 4th; new TR4A clutch kit; uprated cooling system with alloy radiator, electric fan and Evans Waterless Coolant. On the structural/cosmetic side: all outer panels chemically stripped and e-coated by SPL of Dudley prior to a professional repaint in red; new stainless steel bumpers and brightwork; stainless steel headlamp guards; new aluminium fuel tank; painted wire wheels and tyres; stainless steel exhaust; full interior retrim with black leather seat covers etc; new set of weather gear (hood, sidescreens and tonneau cover); battery cut-off switch. The chassis was found to be in perfect condition being a galvanised item fitted by a previous owner. Since the restoration was completed the car has only covered 4,000 fine weather miles and it remains in outstanding condition throughout. To prove the point, it won the TR Register (Birmingham Group) TR2/3 Concours in 2012 and won the Master Class Concours six more times over the next seven years, beating off opposition not only from the TR2/3 Class but also from the TR4, TR5, TR6 and TR7 Classes. Documentation includes a V5C; old style V5; green logbook from 1974; MOT to March 2021; 19 old MOTs back to 1998 at 14,840 miles (now showing 23,709 miles) and a large file of restoration invoices. An indoor car cover is also included, the icing on the cake being the nice 660 FOW number plate which is transferable. Perhaps the best TR3A we have ever offered, it is no doubt capable of winning many more trophies in years to come.