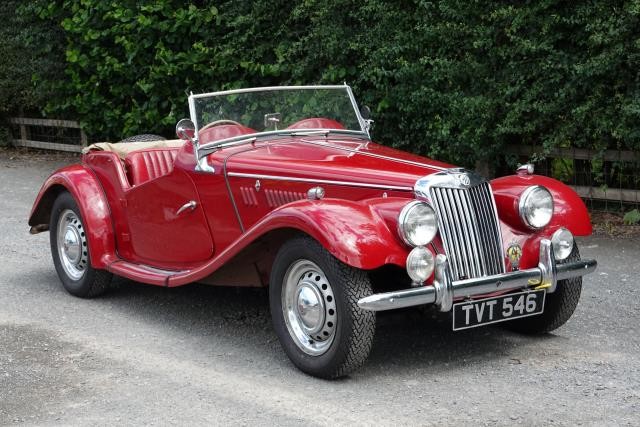 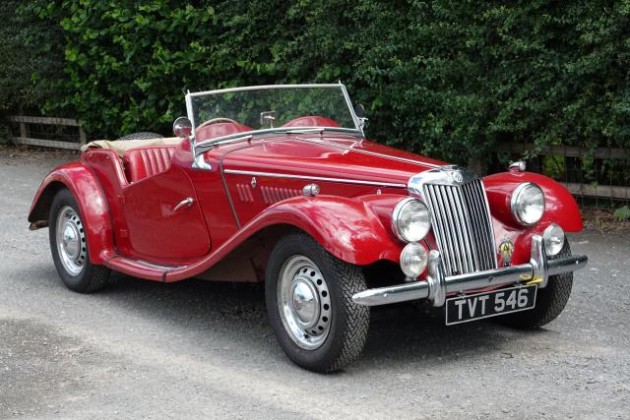 
Last of the MG T-series line and arguably the best, the TF was introduced in October 1953. Although mechanically very similar to its TD predecessor, the provision of a shorter radiator, revised wing line and faired-in headlamps lent it an altogether more streamlined air. Equipped with rack-and-pinion-steering, independent coil-and-wishbone front suspension and four-wheel drum brakes, the sporty new model was everything that MG’s fan base had hoped for. Powered by a 58bhp twin-carb 1250cc XPAG four-cylinder engine, the TF could crack 60mph in around 18 seconds with a top speed of 80mph. From November 1954 onwards it was also available with a 63bhp 1466cc XPEG engine. Just 9,600 TF models were made before it was replaced by the entirely different MGA in 1955, the overwhelming majority being sold in LHD to the American market. As the Heritage Certificate confirms, this 1250cc model is a rare UK market car that was first registered in Stoke-on-Trent in March 1954. The original buff logbook shows that the first three owners only kept the car for a few months each but the fourth owner, Bert Rogers of Wem, kept it for 17 years. A professional car restorer, he also made a bespoke aluminium hard top for the car in 1960 (as detailed in drawings and an old newspaper cutting on file) which remains with the TF to this day but will need collecting from the Worcester area before the end of August. The fifth Shrewsbury-based owner then acquired it in 1973 and was to keep it for the next 41 years. Between 1980 and 1982 he treated the car to a body-off restoration (as detailed in an album of photos on file) and then barely used it, old MOTs showing that it only covered 2,700 miles over the next 32 years. A stainless steel exhaust was fitted in 2007, new carpets in 2008, reconditioned carbs and an electric fuel pump in 2010 and the cylinder head was rebuilt in 2011. In May 2014 he finally parted with the car, putting it into a Brightwells auction where the current owner acquired it, paying well above the estimate to secure the car - £27,440 to be precise. A keen rally driver and navigator, he promptly sent the TF to South Western Coachworks of Lyme Regis to prepare it for regularity rallies. This included a thorough service and tune-up; new engine, gearbox and exhaust mountings; full brake overhaul; new clutch kit; new speedo cable; new floorboards; new wiring; flashing indicators conversion; uprated halogen headlights and spot lamps plus much else besides. A Halda Twinmaster was also fitted, the final bill for this lot being £3,400 plus £960 for the Halda. The car was then used in several events (all detailed in a notebook on file), covering some 2,500 miles until it broke down on the M6 on the way back from an event in Scotland in May 2015. This led to a full engine rebuild by Malvern Rebore which cost £2,100 and included new pistons, bearings, timing chain, rear oil seal conversion, lead-free head, reground crank and balanced crank/flywheel. Restored to full health, the TF then clocked up another 2,600 miles on various other events, gaining electronic ignition, a sports coil, new brake shoes and wheel cylinders, new starter motor, five new tyres and at least two services along the way. The owner then fell ill and the car was laid up in the autumn of 2018 where it was to remain until we collected it shortly before this auction. A full set of weather gear accompanies the car (hood, sidescreens, tonneau cover) all in excellent condition. Documentation includes a V5C; old style V5; original buff logbook; Heritage Certificate; 28 old MOTs; many old tax discs; a b/w photo of the car taken in 1956; original owner’s handbook; original workshop manual; period sales brochure; Halda Twinmaster instruction booklet; photo album of the 1980s restoration plus many invoices for subsequent upkeep and a detailed usage log from 2014 to 2018. Retaining its original (transferable) number plate, TVT 546 shows just 74,100 miles on the odometer which is almost certainly correct and has only covered 7,800 miles since the restoration in 1982 and only 2,600 miles since the engine rebuild in 2015. On offer here from a deceased estate, this TF remains in very good order throughout, as you would expect given the enthusiasm of its late-owner who was extremely attached to the car, as were the two owners before him. We hope that the fortunate new keeper will become equally fond of it. For more information please contact James Dennison on 07970 309907 or email james.dennison@brightwells.com