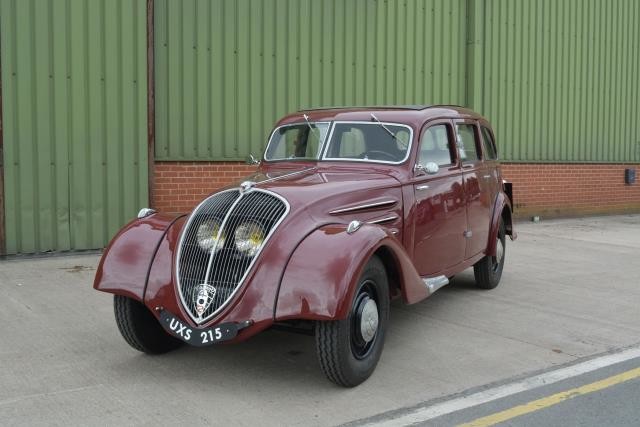 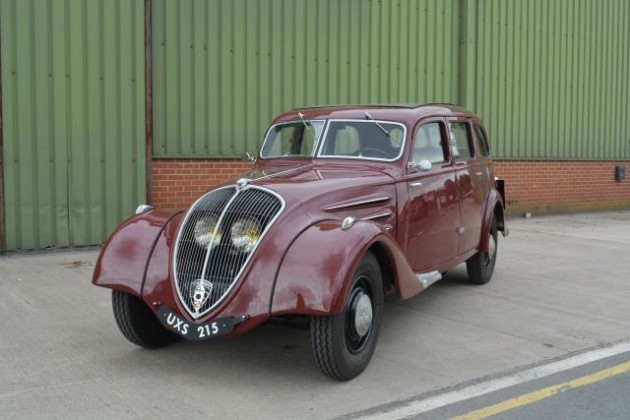 This completely stunning Peugeot starts off with a fascinating back-story. It is reputed to have been owned by long-time owner M.Cuterone who tells of it being bricked up in a barn during the war to stop it being used by the Nazis.

He was a travelling salesman and ran the car for many years after the war with the identification 'Drome & VRP' an area of south east France near Valence.

It was subsequently sold on to a local farmer, who's kids learnt to drive it and used it on the farm. It was then put away in a barn.

The present owner purchased the car in 2008 from Antibes, spending the next eight years on a comprehensive body and mechanical restoration.

Photos on file show that it was in quite a state. The car was completely stripped and everything made good - the fit and finish on the underside now being as good as that on top.

The engine is from a 1938 model with 2,142cc. The crankshaft was reground, new white metal bearings poured, new liners fitted, rings, studs, guides, timing chain and core plugs all replaced. Since completion, the engine has only covered 150 miles or so.

The gearbox was fully rebuilt with all new bearings and the rear axle was washed out, checked and declared fit and healthy. The simple yet effective brakes have had new cables, linings and the drums trued and new king pins and bushes have also been fitted. Stainless fittings have been used throughout.

A new wiring harness has been installed along with a modified dynamo and indicators added for safety.

Much bodywork has been done and very well painted in polyurethane, with just a few blemishes which have occured in the rebuild.

The standard of the work is exceptional, including the fitting of a heater to the massive rear compartment. There are still a few minor jobs to complete, the rear bumper is not yet fitted, as are the hubcaps which are currently resting in place for the photos.

The rear wooden floor is a masterpiece and one could carpet it but it would be a crying shame - it may have been like that from new. The seats carry their original material which could be replaced if so desired and it needs door cards and a headlining to complete the interior.

This is a real head turner and has been extremely carefully and thoughtfully restored. It must have cost its owner significantly more than the modest catalogue estimate to get this far and with so little more to do, it looks so tempting and is perfectly usable as it is.

The file includes multitudes of bills, a handbook (you will need to brush up your French), import documents from France and a current UK V5C carrying the registration number UXS 215.