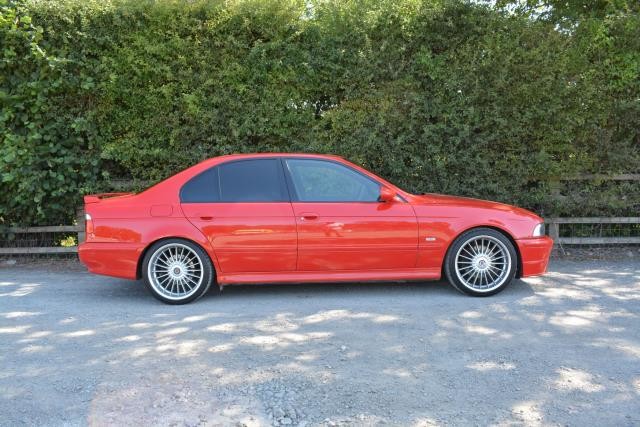 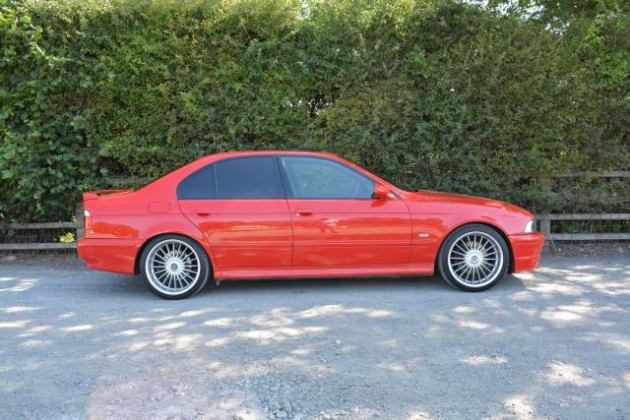 A very rare, and fine performance car indeed. Four owners, the last for 15 years. 4.6 V8 with auto box, the gentleman's option to the M5

Supplied new by Alpina authorised dealer Sytner of Nottingham in summer 2001 this very attractive and rare car is a wolf in disguise like many Alpina brethren. Finished in bright red, the car wears its discreet Alpina body-kit beautifully, the real giveaway to the cars status being the trademark jet-fin alloy wheels, lowered Sachs suspension and bigger brakes. The B10 features a potent 4.6 litre V8 rated at 342bhp mated to BMW’s excellent five speed automatic/triptronic gearbox with steering wheel change buttons too. The interior features black leather seats piped red, all embossed with the Alpina logo. The main dash and trim contrasts fashionably in red. As a facelift E39 series model it features widescreen navigation, heated electric memory seats, cup holders, digital climate control with A/C, parking sensors, traction/stability control, front fog lamps, electrically adjustable Alpina branded and stitched steering wheel, sunroof, Alpina mats, Alpina sill plates and in-car telephone. Wearing its 165,563 miles with consummate ease, it looks and feels like its done half that, no surprise given its been in the same careful ownership since 2005 with just three previous owners to that. The history file includes the smart leather Alpina owners wallet with manuals and service book showing 14 service stamps all by Sytner (4) and North Oxford BMW (10) plus the PDI by Alpina Germany on the 19th March 2001. The last service by North Oxford BMW was in February 2019 at 165,133 miles. In addition to the V5C, the file includes a selection of invoices. Work on file of note includes £1385 spent in January 2018 on repairs to both sills from corrosion, new rocker cover gaskets, and new brake lines. 2 new tyres were fitted in October 2017, a repair to the wiring harness in the boot, replacement brake calliper, pads, handbrake shoes and fluid in Dec-16 costing an eye watering £1913 plus other older invoices. Coming with a MOT valid until January 2021 with no advisories recorded. A rare car, no. 67 of a limited number built it offers a great alternative to the E39 based BMW M5 which were all manual and is somehow less thuggish and more gentlemanly. Don’t let the miles put you off, they are very well made and do double that with ease – we recently sold an older Alpina model that had covered 320,000 miles and it was fighting fit and still in regular use. Rarity and exclusivity hey.