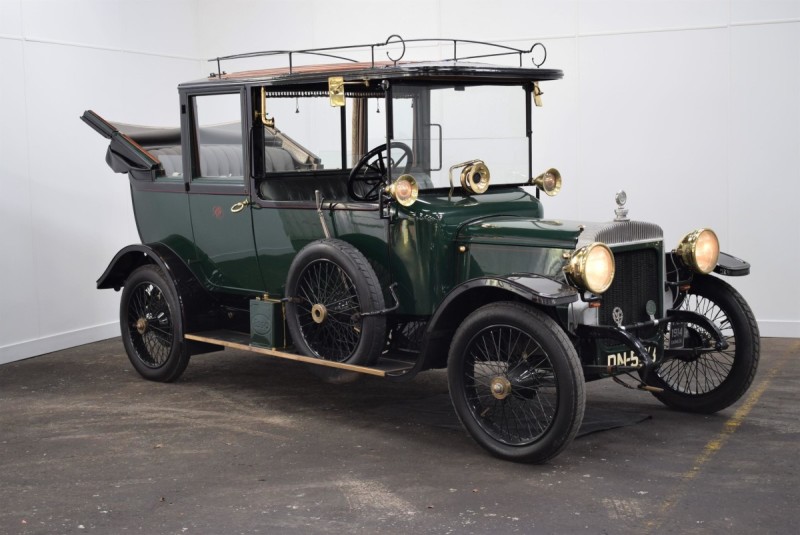 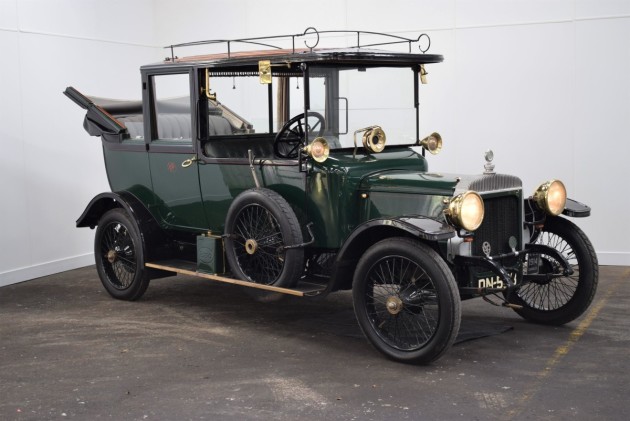 Utterly magnificent; a very well prepared landaulette offering the ultimate in Edwardian luxury; every bit as good as it looks and nice and straightforward to drive; Daimler quality throughout

Blessed with Royal patronage, thanks to the obsession with quality, refinement and silence of operation, Daimler and Rolls-Royce vied for position at the very pinnacle of the luxury car market at the turn of the last century.

Rolls-Royce used innovative engineering, their Ghost relying on perfect balance, build tolerances and the use of lightweight internal components to achieve perfection. Daimler produced cars with equal care and success, making use of the Knight Sleeve-Valve system to ensure a similar refinement. Silence was their objective and their success.

Daimler soon became the choice of Crowned Heads of State across the globe – including our own, as well as numerous Indian Maharajas and Princes the world over. The company was successful in offering their own coachwork, although not obligatory – employing as many as 600 craftsmen back in 1908. Daimler was a major concern.

This splendid 1914 20 hp ‘Bodmin’ Landaulette bore coachwork of their own design and was delivered to its first owner Wm Thackray, an Army officer living in York. Details from York County Council show that it retains its original registration DN 568 which was issued in February 1914. A photocopy of a 1953 VCC dating letter and a more recent VCC Dating Certificate from 2007 are on file which also confirm its build date.

The car disappeared from sight, resurfacing when it was sold in the late 1950s to a VCC member Mr Bosamworth at auction for £290. By all accounts, it was very tired with very worn gears.

The comprehensive history file traces its subsequent owners, some illustrious names among them. Bosamworth sold it to Mr Worth in Devon who passed it to the well-known car hunter Colin Crabbe. It was advertised in MotorSport in July 1963, finding its way to Ted Wooley, another well-known VCC member. Bill Allen in Cheltenham owned the car during this time too, passing it to T Samons who kept it from 1977-1995, using the car extensively for UK and Ireland tours, as well as trips to France. It then went to Mr Harris between 1995-2005, Mr Hughes from 2005-2009 who purchased it at Bonhams Olympia sale for £38,000 and thence to Mr Lloyd who acquired it through Gavin McGuire.

The car arrived in the vendor’s hands from Mr Lloyd in 2018, since when it has had regular use, storming up local hills with ease thanks to its torquey 3.3-litre engine. He has enjoyed improving further the running of the car, which is now most impressive in that respect. He has just serviced the car including fresh engine oil and coolant.

There are many significant invoices on file, showing that Harris commissioned a full and very expensive restoration during the mid-1990s. Respected restorer Richard Peskett undertook the work to an exacting standard, covering all aspects of the car. The chassis was fully restored, a full set of new gears fitted to the gearbox (nearly £6,000 for the parts alone) and some ash framing repaired on the body. It was fully and beautifully retrimmed, using correct grey cloth and embroidered fabric (with tassles!) at the rear and vegetable-dyed green leather for the driver. The folding Landaulette top was also trimmed in black leather which remains supple and very easy to use and the car coach painted in Deep Royal Green – how appropriate.

More work took place in 2003, with a new top tank to the fluted radiator with further expenditure on all manner or detail parts. Further details abound, down to the correct and fully functioning CAV electric lighting set and the centrally mounted ‘Roarer Horn’ unique to Daimler models. Also worthy of note are the restored speaking tube to communicate with the driver and the beautifully trimmed foot warmer for rear passengers. Indicators have been fitted for safety.

In 2010 the engine was rebuilt with new white metal big ends by Formalls for the four, brand new Arrow conrods – the engine ticking over today like the proverbial Swiss Watch just as it should.

It would be hard to imagine how much it would cost to put a car back into the condition we find today, but it must run well into six figures. It truly is magnificent.

Within the fascinating history file is an original 20hp handbook, copious notes and invoices and simple starting instructions. Following these is straightforward, for the car is fitted with its original and very effective electric start. It fires immediately and ticks over at minimal revs. Driving the car is easy, it has ample power and a typical Daimler turbine-like smoothness.

A film script on file from the TV series ‘House of Elliot’ hints at a previous film career, an identical sister car to this prime example appearing in the hugely popular 'Downton Abbey' series carrying the King and Queen on their official visit to the house.

One of just a few survivors, it should by rights be worth hundreds of thousands, but is available for a very reasonable sum. The quality of the restoration and the way that it runs and drives makes this a particularly accessible way to enjoy the cream of Edwardian motoring.