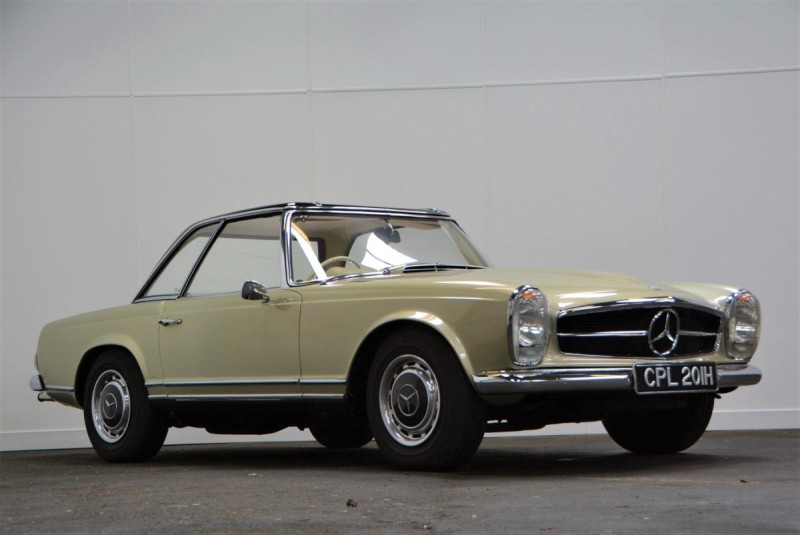 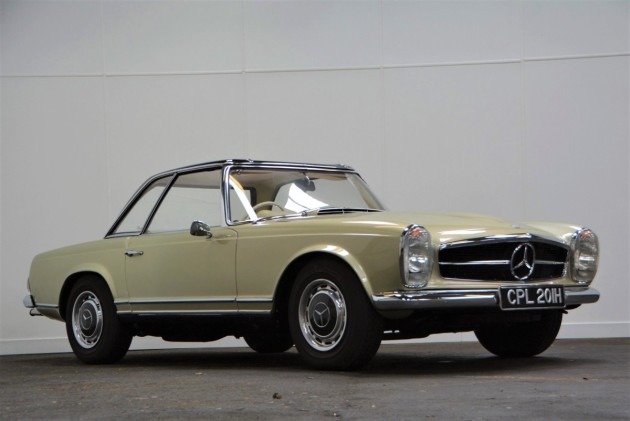 Supplied new by Woking Motors in December 1969, this striking 280SL is finished in its original colours of Tunis Beige with a contrasting Tobacco brown hard top and a brown mohair soft top. Inside it has cream MB Tex seats with matching ivory steering wheel and oatmeal carpets. An automatic model with desirable power steering, it also has the optional sideways-facing rear occasional seat. In car entertainment comes from a period Becker Europa radio with an electric aerial and modern Alpine speakers discreetly fitted in the boot and at the corners of the front windscreen.

The service book shows that it was maintained by Woking Motors up until 1980 at which point it had covered 48,850 miles, with another stamp by Vadgama Motors of Kew in 1982 at 53,179 miles. Lots of bills show subsequent upkeep and there are 27 old MOTs on file to warrant the current mileage of 98,444 plus many old tax discs.
In 1999 at 73,784 miles the car was treated to a full engine rebuild with six new pistons, new big end and main bearings, timing chain, reground crank etc. by SL specialist Roger Edwards of Wembley. The cylinder head was also converted for unleaded fuel, the bill for this lot coming to just under £5,000. A stainless steel exhaust with a lifetime guarantee was fitted at around the same time.
Our vendor acquired the car via Brightwells in 2008 to join a collection of classics and has spent much time and money to bring the car up to the standard he required, with bills on file for parts alone amounting to over £10,000, most of them supplied by Merc specialists SLS of Hamburg. This included substantial repairs to the structure with new inner and outer sills, outer cover plates, both front floor pans, one rear floor pan, both firewalls and a new boot floor, internally lined with sound deadening material.


The cylinder head has been stripped and rebuilt with a new camshaft and followers, new exhaust valves and seats and new valve guides. The fuel injection pump and injectors have been replaced using new OE parts which alone cost 3,700 Euros. The braking system has been completely overhauled with many new parts including the servo, master cylinder, all pipes and hoses, calipers and disks. Four new Koni shock absorbers have also been fitted along with new OE rear springs.


On the inside it has received new oatmeal carpets in the correct square weave material with hessian overmats to protect them. Both front seats have been reupholstered in the correct MB Tex. We are told that all the dials and instruments function correctly, including the clock. The brown mohair hood fits well and is in good condition with one small repair which was professionally done several years ago, as can be seen in the photos.
Documentation includes a V5C; several old V5s detailing most of the previous eight owners; many invoices; 27 old MOTs; the original handbooks and data card and a two-volume workshop manual. The original jack and tool kit are present along with a fitted indoor car cover, the car having been kept in dehumidified storage throughout our vendor’s 13-year ownership.

As you can see in the photos, the car looks very well indeed, the only real blemishes that we noted being a few rust bubbles under the paintwork here and there, as shown in the photos. Starting promptly and driving beautifully as we have moved it around on site, this is a most appealing Pagoda all round and is being offered here at a very attractive guide price.


For more information contact James on 07970 309907 or email james.dennison@brightwells.com