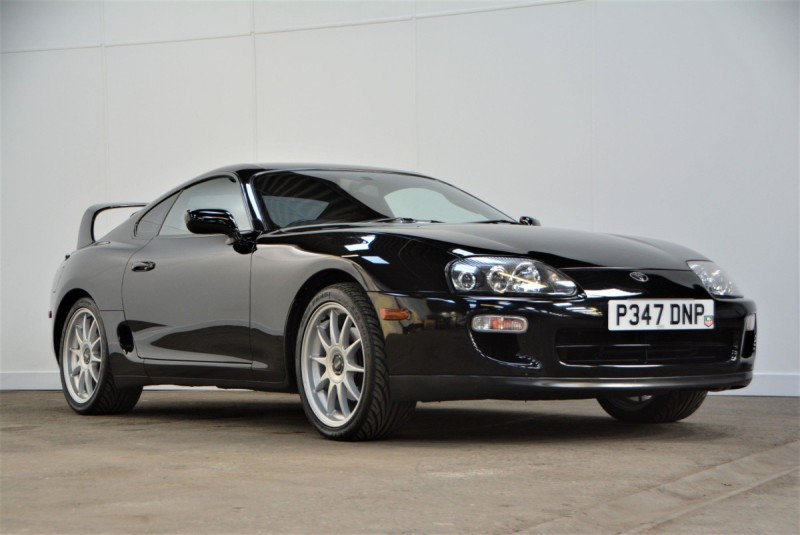 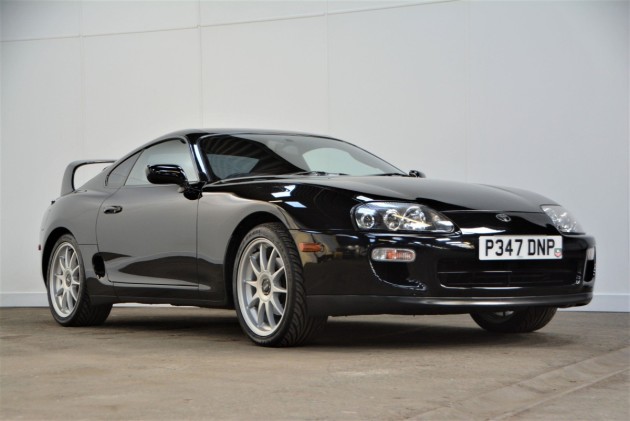 Less than 20,000 miles from new; imported from Japan in 1998 and only two owners since, the current for 17 years; highly original and unmodified; Japan's answer to Porsche and Ferrari; find a better one!

Built in 1997, this Toyota Supra Twin Turbo automatic came to the UK from Japan when it was just a year old, a certificate on file confirming that the speedometer was converted to UK specification in October 1998 when the odometer reading was changed from 7,309 km to 4,540 miles. An unbroken run of 20 old MOTs charts the gradual increase in mileage from 12,355 in April 2000 to 19,916 in May 2019. The odometer now shows 19,949 miles which is the genuine distance covered from new.
The first five MOTs were carried out by Pinfold Motors of Bloxwich and the next 15 by Toyota dealers Charles Clark Motors of Wolverhampton. The service book shows three stamps, the first at 9,122 miles in July 1999 by Cutlers Toyota, the second at 13,641 miles in March 2001 also by Cutlers and the third at 17,960 miles in May 2005 by Hartwell Toyota of Wolverhampton.
Our vendor, who is the second UK owner, acquired the car in July 2004 and kept it up until his death in April 2020 when the V5C was put into the name of his widow. We are told that the Supra was his pride and joy, being used sparingly in fine weather only and always kept garaged when not in use.
As you can see in the photos, the car is in superb condition throughout, the only blemishes we noted being a very small dent on the front right wing just above the bumper and some slight lacquer peel around the Toyota emblem at the front. Apart from the 18" Team Dynamic alloys and the Ripspeed steering wheel, the car appears to be totally standard and unmodified – most unusual with these MkIV Supras which are regularly tuned to 600bhp+ and are all too often smothered in boy racer body kits.
Fitted with a Sigma alarm immobiliser, it also has a Sony CD/tape/radio player with a 10 disc changer in the boot. Two sets of keys and alarm fobs are present along with an original 172-page Toyota Supra Owner’s Manual in English.
With a conservative 280bhp as standard (over 300bhp in reality and officially 326bhp for European markets), this iconic Japanese sportscar was a match for any Porsche or Ferrari in its day - even the carpets had hollow fibres to save weight. Tested by Car & Driver in 1993, a manual Supra had 320bhp, did 0-60 in 4.6 seconds, 0-100 in 11.1 seconds and had a top speed of 160mph, proving faster than the contemporary Porsche 911 3.6 Turbo. The auto version could hit 60mph in 5.1 seconds. Manual cars have been tuned to over 1,000bhp but the standard auto 'box can only safely take 550bhp.

The Twin Turbo has gained a cult following in recent years, not least due to appearances in the Fast and Furious film series and in computer games like Gran Turismo, with manual versions already fetching six-figure sums in America. Surely among the best and lowest mileage Supra Twin Turbos remaining, this stunning example would grace any forward-thinking collection.