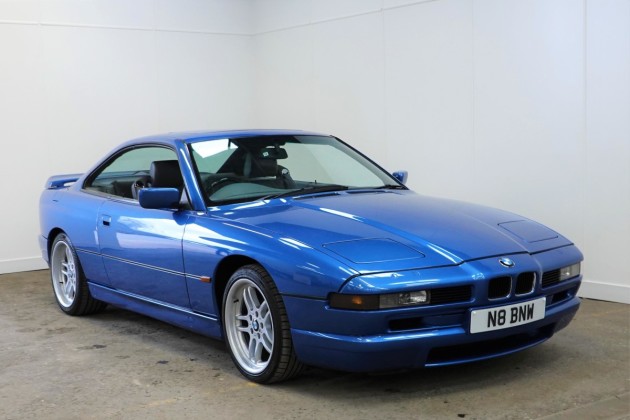 One of the best-looking coupes of the modern era, the flagship BMW E31 8 Series was launched in 1990 with a 5.0 V12 but a 4.0 V8 joined the range in 1993. With 282bhp on tap, it was virtually as quick as the V12 but considerably cheaper to run, with superb build quality which still impresses today. In 1995 things got even better when a 4.4 V8 joined the range which not only had more torque than the 4.0 (310lb/ft) but also had better fuel economy. It also did not suffer from the premature bore wear which could affect the Nikasil linings of the 4.0 model.
First registered in May 1996, this 840Ci looks stunning in Estoril Blue (a special order colour from BMW’s Individual menu) and has the later 4.4 V8. It rides on staggered fitment 18" M-Parallel alloys (an expensive extra and all recently refurbished) shod with good quality tyres that look to have been renewed recently. It also has deep spoilers front and rear (another expensive extra as fitted to the Sport model) plus a boot lid spoiler and colour-coded door handles.

It has covered 121,368 miles to date and comes with an excellent service history comprising 13 stamps in the book, the last only 200 miles ago in April last year when new brake discs and pads were fitted front and rear along with a new radiator and a regas of the air con system. That gives an average service interval of just 9,300 miles with many supporting invoices.

It has had just four owners from new, the second of whom kept it for eight years (1997 – 2004) and the third for 16 years (2004 – 2019). Clearly a much-cherished machine, it looks superb with gleaming paintwork. All the windows work as they should, as does the sunroof, and even the read-outs on the various displays are nice and sharp with no dead pixels. The original tool kit is present in the boot lid compartment, the handbooks are all present in the original leather wallet and it also comes with a nice (transferable) personalised number plate. Starting promptly and running beautifully as we have moved it around on site, it has an MOT to September 2021 with no advisories recorded.

These E31 8 Series BMWs are top quality cars which still turn heads wherever they go. The slender front kidney grills come straight from the M1 supercar of the Seventies and are a far cry from the vulgar front-end styling which afflicts the current generation of BMWs, the new G15 8 Series included.

Only 7,803 840Ci’s were made in total, just 3,075 with the 4.4 V8 and the vast majority in LHD. Only 139 came in Estoril Blue and this striking example, with its impeccable service history, desirable extras and few owners, looks mighty tempting at the sensible guide price suggested.
For more information contact James on 07970 309907 or email james.dennison@brightwells.com