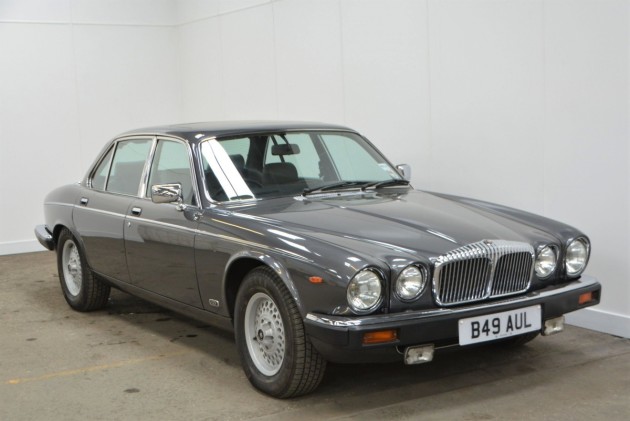 Dating from 1985, this lovely Daimler Double Six Series III spent the first eight years of its life in sunny South Africa before coming back to the UK in 1993 at which point it had covered around 12,000km (7,500 miles) a total which has since only risen to 22,114km (13,800 miles). Our vendor, who is the third UK owner, acquired the car from Racing Green Cars of Hampshire for £15,000 in November 2004 when the odometer was showing 18,403km (11,500 miles).
Finished in Regent Grey metallic with a Savile Grey hide interior, the car comes with a good service history comprising four stamps in the service book at the following intervals: 1,315km in April 1985; 12,535km in June 1995; 17,814km in April 2002; 21,221km in August 2010. Invoices show three subsequent services in April 2013, August 2019 (when new front brake pads and a new o/s/f brake caliper were fitted) and an undated mini service at 22,053km since when it has only covered around 40 miles.
In addition to this the car had a new differential, four new rear shock absorbers, new brake pads all round plus a few other jobs all carried out by HA Fox at 17,818km in May 2002 which cost £3,204. Also on file are 13 old MOTs back to 1996 plus a current MOT valid October 2021. All the handbooks are present in the original wallet.
As you can see in the photos, the car is in very good condition throughout apart from some minor rust bubbles at the corners of the windscreens. Starting promptly and running beautifully as we have moved it around on site, it must be one of the lowest mileage examples remaining. It has an agreed insurance value of £15,000 and looks great value at the modest guide price suggested.
For more information contact James on 07970 309907 or email james.dennison@brightwells.com