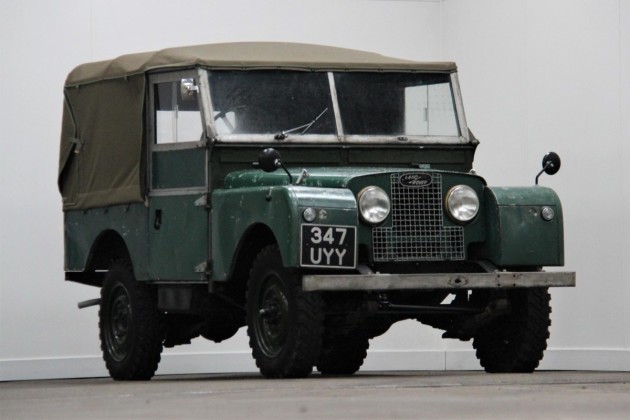 Ground up restored example retaining as much originality as possible; lots of restoration information; on offer from a deceased estate

The BMIHT Certificate for this 1953 86" Land Rover tells us that it left the Solihull works on 5th October 1953 destined for David Rosenfield Ltd, Manchester.

A RHD home-market car, it ended the first phase of its working life in a dismantled state, stored in a garage in Shurdington, Glos where it was to remain for 27 years. The vendor's late husband, decided it needed sorting so took on the dismantled project from his friend and proceeded to rebuild it over the ensuing four years.

The chassis was rusty, but was carefully restored using new outriggers and necessary repairs throughout. It is the original to the car, something which is yet to be fully appreciated in Land Rover circles where new, non original replacements are the easy way out these days. Numerous photos on file show the extent and quality of the work, which also shows the extensive restoration of the bulkhead - from a pile of rusted panels to the completed, primed end result. Clearly no stone was left unturned.

The rolling project was displayed at a local show, where the overwhelming view from the crowd was to put the body back on the restored running gear in its original, patinated condition. The panels are pretty straight, but retain a well-worn paint finish which looks in keeping with the originality of the vehicle.

A number of invoices show parts used, backed up by photos of the restoration. It has been carefully updated with an alternator and -ve earth wiring, five new tyres, a new tilt, side windows and runners, battery (2020), exhaust, brake master cylinder etc etc....

The only non-correct parts that we know of are a Series III petrol tank (still with under seat filler) and a rather nice sprung steering wheel from a Riley 2.5 with horn and indicators.

The whole project was nearing completion when its owner sadly passed away, his widow commissioning the completion by a good friend to bring it to the condition we see today.

This is a very usable example complete with two-litre power. Bidders are advised that it has seen little use since completion and it sounds like there is a dry bearing in the clutch mechanism (which is all new) which may improve with use or require a drop of oil in the right place.