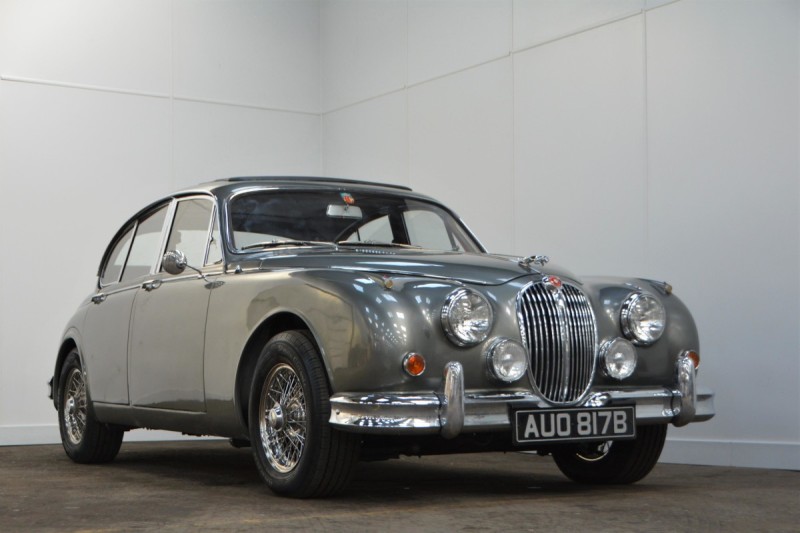 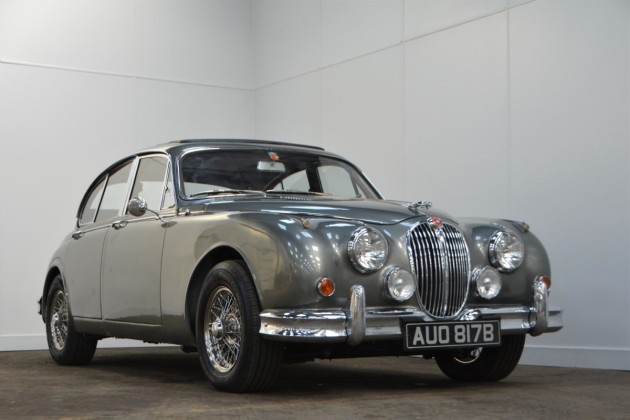 One of the best-looking saloon cars ever made, the Jaguar MkII was launched in 1959 and sold strongly until production came to an end in 1967. Although everyone raves about the top-of-the-range 3.8, many people consider that the 3.4 is actually the better car. Featuring the famous twin-cam 3,442cc XK engine, as used in the earlier C and D-Type models, the short-stroke 3.4 was a particularly sweet-running unit with excellent performance – at 210bhp it was only 10bhp shy of the larger 3.8-litre and could still hit 120mph flat out.
Dating from 1964, this Jaguar MkII 3.4 has had just three previous owners, according to the V5C, and was acquired by our vendor as a restoration project in March 2017. He promptly set about a total nut-and-bolt restoration which took over three years to complete with bills on file for well over £23,000 spent on parts alone, excluding the interior retrim.
The full extent of the work carried out is far too detailed to list in full here but rest assured, no corners were cut and good quality parts were used throughout, mainly supplied by SNG Barratt and David Manners. The bodywork was fully restored with many new panels from Martin Robey, with a louvred bonnet and Coombs rear wheel spats for a more sporting look. It is finished in Jaguar Opalescent Silver Grey. The bumpers and grille were rechromed by ACF Howell of Walsall at a cost £1,626 and five new 15" stainless steel wire wheels supplied by MWS International with new tyres which cost £3,630. A new galvanized fuel tank was also fitted along with a stainless steel exhaust.
The engine (which is original to the car) was fully rebuilt with new pistons, bearings etc, the cylinder head being converted for unleaded fuel. The gearbox was rebuilt and the overdrive cleaned and tested. The rear axle has been stripped and overhauled. The entire braking system has been renewed, as has the suspension with new springs and Koni shock absorbers. A power steering conversion kit by SC Parts has been fitted which cost £2,606. The wiring harness has been renewed and converted to negative earth along with a new alternator and new lights, with upgraded LED lights for the dash instruments.
The interior woodwork was refurbished to an excellent standard by Chapman & Cliff at a cost of £1,700. The seats and door cards have been retrimmed in top quality red leather (which looks stunning and smells absolutely gorgeous!) and a new fabric sunroof fitted along with a new headlining and new carpets.
Since the restoration was completed the car has only covered a few ‘shake down’ miles and will need a period of careful running-in before the performance is exploited to the full. It has been starting promptly and running beautifully as we have moved it around on site, with a notably sweet-sounding engine and nicely weighted power steering which makes low-speed manoeuvring a doddle.
The vendor has poured his heart and soul into restoring this car and never planned to sell it but unfortunately his business has been hard hit by the Covid pandemic and, very sadly, the Jaguar now has to go. Bid vigorously now and his loss could be your gain.