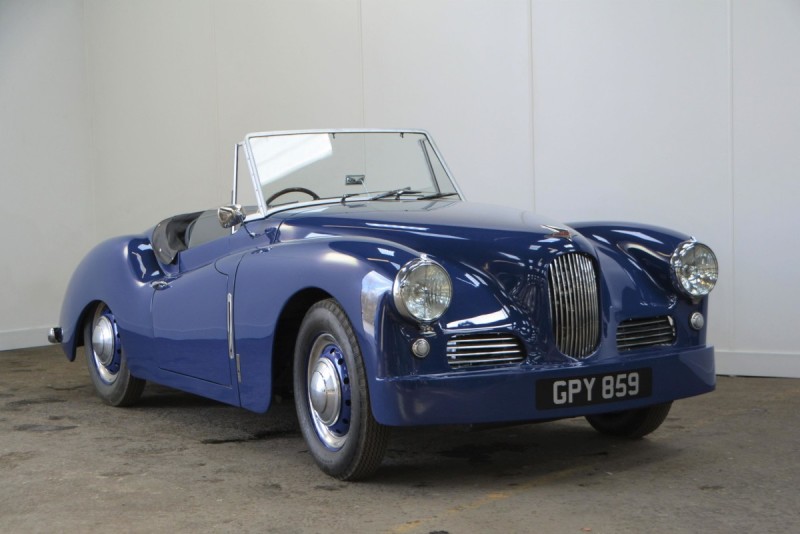 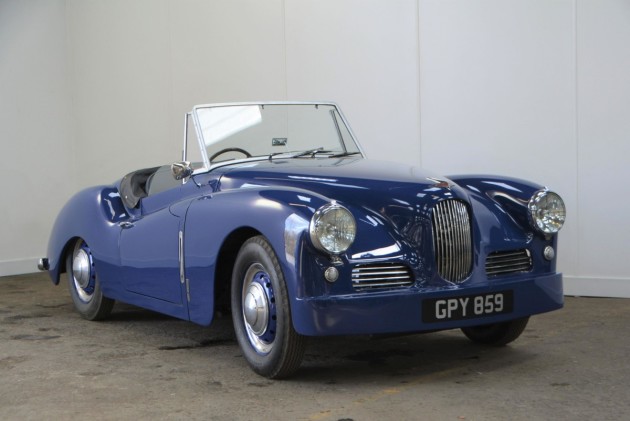 One of only four made and three surviving with aluminium coachwork by Rawson; interesting history and first owned by Sir Hugh Bell, father of Derek; Mille Miglia eligible; fresh from a total nut-and-bolt rebuild that took 10 years to complete

The Jowett brothers began car production at their Bradford factory as early as 1906 but the car that really put them on the map was the Javelin of 1947, a compact family saloon that was so far ahead of its UK-produced rivals that it had more in common with the best that Europe had to offer.
To quote Georgano: "With its independent torsion-bar suspension, rigid unitary body-chassis construction, good aerodynamic shape, light weight and high gearing, its fine handling, 80mph maximum speed and combination of excellent acceleration and high cruising speed, it was more reminiscent of the pre-war Lancia Aprilia, the Fiat 1100 or the BMW."
Fast and economical, the Javelin not only sold well (25,000 in five years) it also racked up class wins in events like the Monte Carlo Rally and the Spa 24-Hours. This prompted Jowett to launch an even sportier version, the Jupiter, which they hoped would boost their overseas sales and thereby entitle them to a greater allocation of steel, a precious commodity in post-war Britain with supply tightly controlled by the government.

For the chassis design they approached ERA who came up with a stiff tubular steel affair developed by their star recruit, Austrian engineer Eberan von Eberhorst, formerly of Auto Union. The suspension used torsion bars front and rear, independent at the front and easily tuned for competitive use. Steering was by rack-and-pinion and brakes were Girling hydraulic all round with twin leading shoes at the front.

Power came from a tuned version of the 1,486cc flat-four ohv unit in the Javelin with twin carbs and a higher compression ratio which developed 60bhp. Mounted well ahead of the front axle with the radiator low down behind, it drove through a four-speed column change gearbox with synchro on the top three gears and proved good for a top speed of 90mph.

Production cars had a steel and aluminium open body styled by Jowett's own Reg Korner, with a bench seat for three people. There was no external access to the boot and the bonnet was rear-hinged and opened complete with the wings.

The Jupiter was an instant success with a record-breaking class win at Le Mans in 1950, a class 1-2 in the 1951 Monte Carlo International Rally, an outright win on the 1951 Lisbon International Rally, and a class 1-2 at Dundrod in a gruelling 4-hr sports car race on public roads in 1951. Le Mans was again class-won in 1951 and 1952, and lesser events were taken in 1952, but by 1953 newer faster cars were proving a match for the Jupiter which was a well-appointed touring car first and a racer second.

By the time production came to an end in 1954, just 899 Jupiters had been built, including a few special bodied cars, of which just 561 were right hand-drive. Peter Ustinov owned one, as did John Surtees and legendary race team manager, John Willment.
This particular car is a real rarity, being built on one of the 75 chassis that were made available to external coachbuilders like Stabilimenti Farina, Ghia Suisse and Abbott of Farnham before the production cars were ready. It is one of only four cars built by the tiny firm of John Colinsons of Slough, a coachbuilding company formed by Lionel Rawson and Dave Piper in 1947.
Rawson was an ex-aircraft engineer who bodied several different British marques and would later work with Donald Healey in producing the front and rear of the Healey 100 Bonneville Land Speed streamliner car. Rawson’s design used aluminium throughout and included a clamshell-style bonnet and a fully enclosed rear panel made in one piece without separate wings.
Chassis number 25, this car is the first of the four to be bodied by Rawson and it became the very first Jupiter to be sold into private hands when it was purchased by Sir Hugh Bell, father of racing driver Derek Bell. The chassis itself was delivered by Jowett Cars Ltd to their agent, Harewood Garage of Thornaby-on-Tees on 10th October 1950. It was a fully equipped driveable rolling chassis with the standard Jupiter engine fitted and, as with the very earliest cars, it was typed as a Javelin Jupiter, hence the bonnet badge it wears today.
The history file is fascinating and comes with a hand-written letter from Sir Hugh dated May 1966 recalling in some detail how he came to buy the chassis from Jowett once it had done the rounds of the dealers as an exhibit and how he took a hands-on role in building it – scrounging parts from the Jowett works in Bradford, getting the former Service Manager at Lagonda to do the wiring and trimming, painting the chassis with many coats of Mander’s Black varnish and tuning the suspension to his own tastes while the body was still being made.
It was finally finished and registered for the road as GPY 859 on 7th December 1950, the original buff logbook recording Sir Hugh Bell as the first owner. He was to keep the car for three years and used it intensively, getting through engines at an alarming rate thanks to his heavy right foot and the poor-quality petrol of the day.
"When it went the car was the quickest and best-mannered I have ever had," he writes. "I did Darlington to Chelsea door-to-door in 4 hours 20 minutes (250 miles, average speed 57.75mph) comfortably. This on pool petrol diluted with 50% industrial alcohol – and there was no dual carriageway north of Hatfield! Until the Mercedes 300SLR, I thought it the best car in the world in the wet. It seemed a lucky car and is the only one I never spun. I was only stopped once by the police for doing 80 down the Severn Sisters Road. It was about 2 o’clock in the morning and they let me off!"
Sir Hugh sold the car in July 1953 in favour of another Mercedes: "I was doing 30,000 miles a year at the time, often with passengers… I remember the Jupiter with the great affection one has for intelligent but difficult children on whom much thought is lavished and who make up for it by intermittent brilliance. I would recommend the empty twisting hilly roads of Scotland to know it at its best!"
GPY 859 then went through four more owners, the third of whom toured Italy in the car, before being acquired by a Giles Tozer of Tavistock and London in July 1965. He appears to have used it for a while before entrusting it to Jowett specialist Charlie Dodd of Erith for a restoration.
Tozer spent much of his time in America and communication clearly became an issue, with Dodd sending increasingly frantic letters demanding the settlement of unpaid bills or he would have no option but to dump the car outside in his yard – a fate which does indeed seem to have come to pass. Tozer finally got the car back and put it into storage where it languished until our vendor acquired it in April 2010.
By this time it had been completely stripped of everything and was in a very poor state. A serial Jowett restorer with a collection of similar cars, our vendor embarked on a total nut-and-bolt restoration which was to take almost 10 years to complete, much of the time being spent undoing and rectifying alterations that had taken place over the preceding 60 years. Although there are no bills to show exactly what has been done, the car speaks for itself and, as you can see in the photos, it is in sparkling condition throughout.

The vendor tells us that he was assisted by various friends and professionals over the course of the restoration: "When I found the car it was in such a state that it was in danger of being lost forever. I slowly built it up weekend after weekend and the hours did not matter – it was my passion and my hobby and I was determined to see it through. My goal was to save a historically important car and to get it back on the road. It wasn’t done up to sell.
"I own and have owned a lot of cars, including numerous Jowetts, and have built up a network of close friends in the classic car world over the years. James Sidwell, the Jaguar XK specialist who has worked on the famous NUB 120 and made cars for the Indiana Jones films restored the bodywork – he is the best of the best, now retired. The paintwork was done by another close friend and the engine was supplied and rebuilt by Jowett specialist Bill Lock, who also did the gearbox. The trimming was done by Vision Leisure, specialists in their field and also good friends." Since the restoration was completed it has only done a handful of 'shakedown' miles and will need a careful period of running-in before the performance is exploited to the full.

It comes with a fascinating history file containing many historic bits of printed ephemera from some of the best-known automotive names of the era – Hardy Spicer, Zenith Carbs, Hepolite Pistons, Vandervell Bearings, Laycock Engineering, Cords Piston Rings to name but a few. There is also some entertaining correspondence from previous owners and from the Jupiter Owners Club, to whom the car is well known. There is also a historic photo of the car and others of the stalled restoration in the ‘70s plus three old MOTs from 1967, 1968 and 1972.
Of four Jupiters bodied by Rawson, this is one of three survivors. Another is in Greece and the other, which was raced in period with some success, now resides in Italy where it has more recently ‘competed’ several times in the Mille Miglia Retro, an event for which GPY 859 will also be eligible.

All Jupiters are rare cars and few come onto the open market as they tend to change hands discreetly through the club network. This ‘Rawson Special’ is rarer than most: expertly restored and with an interesting and well-documented history, it would sit well in any collection.