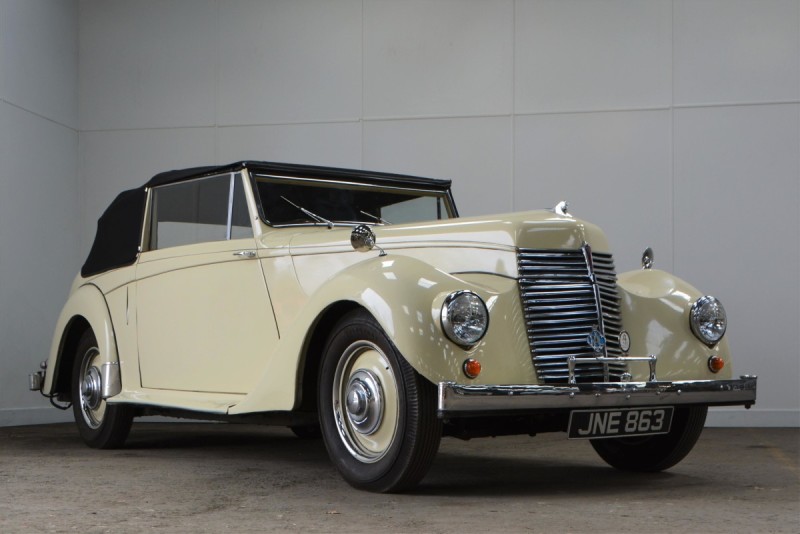 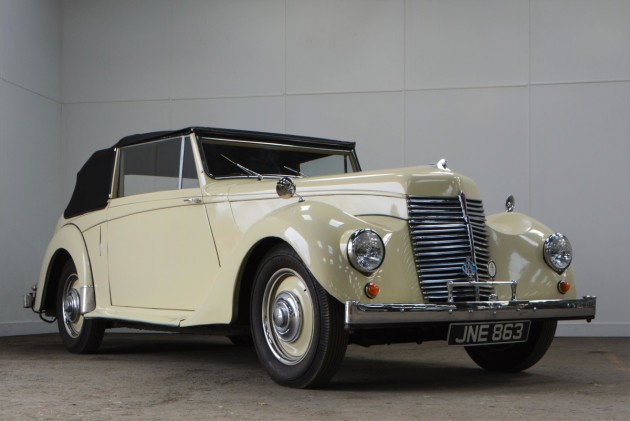 Armstrong Siddeley was founded in 1919 as a result of the amalgamation of aircraft maker Armstrong-Whitworth and upmarket car maker Siddeley-Deasy of Coventry.
The firm established itself as one of the UK's most respected manufacturers of the 1930s and ‘40s, producing quality, well-equipped luxury cars rather than overtly sporting machines. While most motor manufacturers entered the post-war era with relaunched pre-war models, Armstrong Siddeley had been quietly beavering away on a new 16hp range and was able to launch the new Hurricane Drophead in May 1945, followed by the Lancaster saloon version and the Typhoon, Tempest and Whitley – all named after famous aircraft produced during the war by the parent Hawker Siddeley Group and characterised by their distinctive slatted vee radiators and Sphinx bonnet mascots.
A stylish, 4/5-seater, three-position drophead coupe, the Hurricane used a developed version of the advanced 1,991cc 70bhp overhead-valve six introduced in 1938 which gave the car a top speed of 75mph. It featured independent front suspension (a first for Armstrong Siddeley) with Girling hydro-mechanical brakes and a choice of traditional pre-selector or four-speed synchromesh transmissions.
While Lancaster body construction was contracted out to Mulliner, that of the Hurricane was undertaken in-house, as was that of the Typhoon fixed-head coupe and Whitley 'razor-edge' saloon, using steel and aluminium panels over a wooden frame. The latter was new for 1949, its introduction coinciding with enlargement of the engine to 2.3 litres (nominally 18hp).
Production of the 16/18hp range ceased in 1953 after a little over 12,000 of these characterful cars had been made, 2,606 of them Hurricanes, car production ceasing altogether in 1960 when Armstrong Siddeley went back to concentrating on its core business of aero engines.
First registered in Manchester in July 1948, this particular Hurricane appears to have spent most of its life in that area, an old buff logbook showing various local owners including a Derek Aspinall of Manchester who kept it from 1977 until 1993 and treated it to a full restoration in the late 1980s when the colour was changed from its original grey with a blue leather interior to Midnight Blue.
The next owner acquired the car in June 2009 to join his fleet of wedding cars, repainting it in Maserati Cream and retrimming the interior in cream leather piped in brown. He also had all the brightwork rechromed and fitted a new black canvas soft top with a glass rear window framed in chrome. To improve the usability of the car and ensure reliability for weddings, he also fitted a fully overhauled floor-change Sapphire 236 gearbox with overdrive on 3rd and 4th, along with a telescopic front shock absorber conversion (using Mercedes Sprinter van components), a new radiator core, additional temperature and amperage gauges, modern flashing indicators, all new brake linings, a full stainless steel exhaust system and four new Firestone tyres with inner tubes.

Sold via Brightwells in November 2015, the car has covered around 3,000 miles since. An invoice shows that it was last serviced in April 2019 (new plugs, oil and filter, brakes cleaned and adjusted) since when it has only covered around 400 miles. We are told that the car drives well and cruises comfortably at 60mph+ with good oil pressure and temperature at all times. It has certainly been running nicely as we have moved it around on site with a notably comfortable and rattle-free ride, a very quiet engine and reassuringly effective brakes. We are particularly taken by the original rear-view mirror which contains a small Smiths clock within the glass - what a great idea!

It comes with a spare wheel and wheel changing kit; two sets of keys; a good amount of service invoices back to the 1970s; a detailed maintenance log from 2007 – 2015; an original Armstrong Siddeley 16hp maintenance manual; a photo of the car as it looked in 1981; a V5C and an old buff logbook from 1959. There are also 30 old MOTs from 1981 to 2013 which show the mileage rising from 21,265 to 56,023 during this 32-year period, the odometer currently displaying 61,558 miles.
Thought to be one of only seven Hurricanes known to the Armstrong Siddeley Owner’s Club, JNE 863 retains its original (transferable) number plate and is ready for a new owner to enjoy. It looks excellent value at the modest guide price suggested.
For more information contact James on 07970 309907 or email james.dennison@brightwells.com