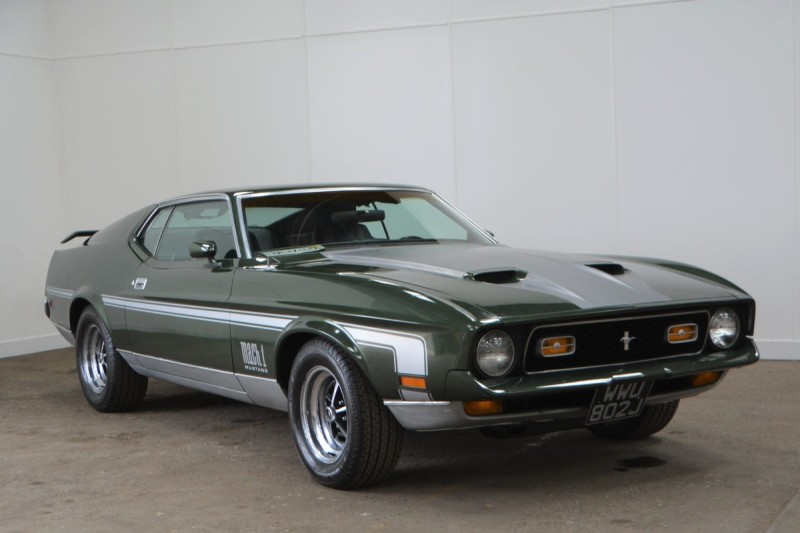 When Ford launched the original Mustang in 1964, the car was an overnight sensation, selling over one million units within 18 months, sales only being fuelled when Steve McQueen’s Lt Frank Bullitt hurled a Highland Green Fastback through the streets of San Francisco in the greatest car chase ever filmed.
However, by 1969 the opposition had finally got their act together and cars like the Chevrolet Camaro, Pontiac Firebird and Plymouth Barracuda were fast eroding the Mustang’s place at the top of the ‘pony car’ tree. Ford’s riposte was the mighty Mach 1, a heavily revised Mustang with a new, larger SportsRoof (fastback) body, air scoops in the bonnet, rear wing spoiler, upgraded suspension, a distinctive interior and a more powerful 'semi-big block' 351ci (5.8-litre) V8 engine that pumped out 285bhp and 370lb/ft. Even larger 390ci and 428ci ‘big blocks’ were soon added with the option of Cobra Jet and Super Cobra Jet tuning packages to push the envelope still further (up to 335bhp and 440lb/ft).
This time James Bond was called in to fuel the sales charts, slamming a red 1971 Mach 1 through the streets of Las Vegas in ‘Diamonds Are Forever’, ultimately evading his police pursuers by tipping the car on two wheels and sliding it through a narrow alleyway in a stunt that destroyed four cars before helmsman Buzz Bundy finally pulled it off! Drag racing legend Mickey Thompson also took three Mach 1 Mustangs to the Bonneville salt flats and set 295 speed and endurance records over a series of 500-mile and 24-hour events.
By 1973 the oil crisis had kicked in and rendered such high-octane fire-breathers obsolete overnight, the ’74-’78 Mach 1 models having weedy V6 and small-block V8s that could barely pull the toupe off a Florida retiree.
Built in Ford’s Dearborn plant in 1971, this stunning Mach 1 SportsRoof has the 351ci M-Code V8 and is finished in Dark Green (colour code ‘C’) which looks superb and only adds to the Steve McQueen cool factor. It has numerous options such as automatic transmission, power brakes (discs at the front), power steering, dual exhaust, AM/FM radio, chrome Magnum wheels plus much else besides.
Imported to the UK in February this year with all duties paid and registered here as WWU 802J, it has documents in the glovebox which show that it had previously lived with just one California owner since 1992 at least. We are told that the car was restored about 10 years ago and, as you can see in the photos, it still looks mighty impressive today with a very smart interior, excellent bodywork and a nicely detailed engine bay. Although it no longer needs one, it also has an MOT until February 2022 with no advisories recorded.
Starting promptly and running nicely as we have moved it around on site, it looks good for another 50 years’ posing at least. If you are worried by the oil stains on the tarmac in some of the photos; don’t be – our photo area is very busy and they are not from this car! A fabulous relic from an era of fabulous excess, this mighty Mach 1 would sit well in any muscle car collection.
For more information contact James on 07970 309907 or email james.dennison@brightwells.com