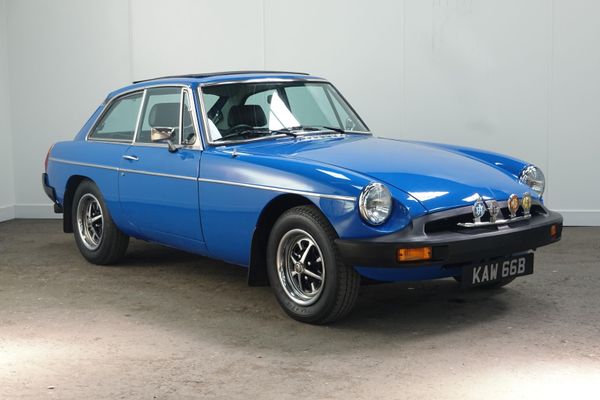 Supplied new by Bishops Garage of Corbridge in August 1977, this lovely MGB has had just four owners since, the third of whom kept it for 25 years (1994 – 2019). It has only covered 54,000 miles to date with many invoices and old MOTs to warrant this figure.
In 2013 it had new seat covers and carpets, new propshaft, new front wings and a respray in the original Tahiti Blue. In 2014 it had a major mechanical overhaul with many new parts fitted including new brake discs and calipers; wheel bearings; all new ignition parts; all oils and fluids changed; new filters and gaskets; polybushed suspension; EZ electric power steering conversion etc, the bill for this lot coming to an eye-watering £6,568. It has only done 1,000 miles since.
The following year it had another £2,578 spend which included a new clutch kit; starter motor; radiator; braided oil pipes; core plugs; hoses plus a multitude of other items. Our vendor acquired the car in May 2019 and has improved it still further including a full service; new throttle cable; wiper blades; chrome wheel trims; Lucas sports coil; Lucas 45D4 distributor; Mountney 14" steering wheel etc. The original steering wheel is also included..
Fitted with a Webasto sliding sunroof and fully functioning overdrive, the car is said to drive beautifully with an MOT until April 2022 with just two minor advisories which have since been attended to. It also comes with the original owner’s handbook, 19 old MOTs, two sets of keys, numerous show plaques and a nice transferable number plate, KAW 66B.
Starting promptly and running nicely as we have moved it around on site with good 60psi oil pressure, it is only reluctantly for sale due to an imminent house move and consequent loss of storage. In sparkling condition throughout, it is ready for a new owner to enjoy over the long hot summer that undoubtedly lies ahead of us!
For more information contact James on 07970 309907 or email james.dennison@brightwells.com