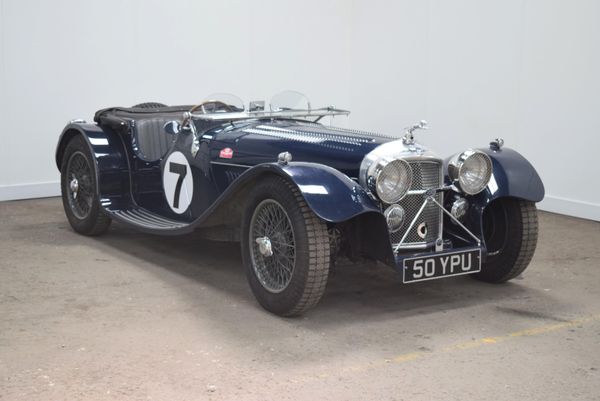 For the most of us, lashing out the necessary £450,000 for a genuine SS100 is not on the agenda, but hold fire - alternatives are available...

A few manufacturers have sprung up making very credible recreations of the real deal - Suffolk and Heritage Engineering being perhaps the principal players. This example, carrying the nice number 50 PYU came from the latter source, but its previous owner sprinkled some of Suffolks magic dust onto it too.

Using a 1975 XJ6 Auto as a donor, the car was assembled and remains registered as a Jaguar  4.2 XJ6L Convertible, and now carries Historic Vehicle status so is both tax and MOT exempt.

The motor appears to have been changed to a 3.8 unit (a revvier and smoother engine by all accounts) which we are told sports an E-Type head and a REALM five-speed manual gearbox conversion.

Its stainless exhaust emits a very satisfying bark and we have greatly enjoyed driving it around the site to take the photos and er...to drive it round the site. It must offer a considerable performance on the road!

The exterior is in a dark Jaguar blue and on the inside we find professionally installed grey leather trim.

It was acquired by the vendor from a private ad in 2017 and he has used it lots, covering various rallies and driving events around mid-Wales where the driving is traffic free and spectacular.

It sits on a set of correct MWS-supplied 18" wires with triple-stud Blockley tyres which go a long way to providing this replica with the correct set of proportions.

There are a few details which could now be tidied, but only of the very minor cosmetic nature such as a tonneau zip and some careful detailing. The car's most recent MOT expired as recently as the end of December 2020 and it comes with a Haynes manual for an E-Type which would cover lots of its mechanical elements.

This impressive Heritage SS100 replica offers a huge grin factor for around 10% of the cost of the genuine article - which most of us would be too frightened to use anyway!!