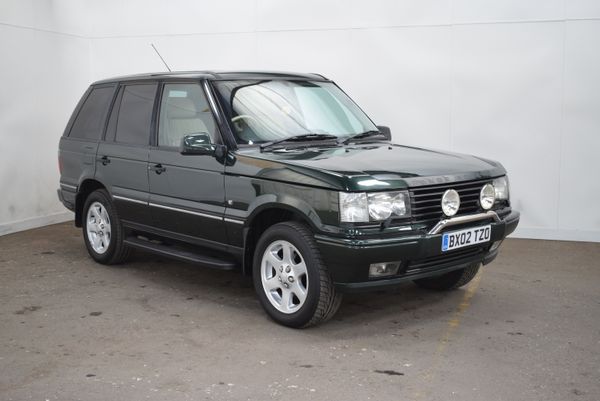 Powered by the big Thor 4.6 V8, the largest iteration of the Buick-derived Rover V8 that had served the company so well, this full-spec Vogue SE is one of the last 300 P38s to roll off the line at Solihull.

A final run-out edition, managed and executed by the Autobiography Division as verified by a metal plaque under the bonnet, this example is finished in Epsom green - fully colour coded and comes laden with goodies including special 'Comet' alloy wheels.

The interior is trimmed in full leather, with fully electric and heated front seats piped in green, the leather extending to the steering wheel, gearknob and handbrake. The carpets are green throughout and the Harmon Karman stereo has additional speakers on the dashtop and doors, as well as a sub-woofer in the boot. The dash includes a working Sat Nav.

The vendor remarks that it drove well on the 100 plus miles to the sale, with the electric windows, central locking and heating system all functioning as they should. The air suspension works too, as shown on the series of side on photos, with a recent new compressor and a valve block rebuild. The car has also just had a new battery fitted.

It carries its original registration number and comes with a full bookpack including the service book which displays 14 stamps, the most recent in 2018 by TGS German Specialists at 127,309 miles.

It retains four keys (two of which are remotes) plus two keys for the lockable LPG filler located neatly next to the towbar electrics and also comes with its EKA immobilizer code.

MOTd until August 2022 and now showing 130,550 miles on the clock, the V5C confirms it is a Vogue SE and also shows that it is properly registered as a Bi-Fuel, thanks to the professionally installed and certified Prinz LPG conversion which was done in 2006. These aluminium engines (with their hardened valve inserts) respond well to LPG conversions, and since the arrival of E10 in the pumps, offer an interesting solution to running classics in our ever-changing environment. The system functions as it should, switching automatically from petrol to LPG as the engine warms up and vice versa.

Other niceties include a stainless exhaust (which emits a nice rumble), drilled and grooved discs all round and polybushed suspension. At one point, a high-spec entertainment head unit has been fitted, with flip out screen, various remote controls and headphones. It also has front spots and a discrete 'Roo Bar', as well as privacy glass to the rear.

This last of the line P38 is well on its way to collectors status, especially so in this case as it has clearly been well cared for during its lifetime. On offer at No Reserve, the highest bid buys the car.