With the summer season in full swing, there was something of a carnival atmosphere at Brightwells on 10th July as the usual vast crowd of enthusiasts descended on the Leominster salerooms to fight over a large and varied catalogue of classics spanning every decade of the 20th Century. With bidders from all over the Continent and as far afield as America and New Zealand, by the end of the day 138 or 76% of the 184 classics on offer had successfully changed hands for a total of £1.8m – most impressive in the current market and up among the top five results achieved at Brightwells since they commenced their Classic sales back in 2005.

Top price of the day went to a fabulous 1923 Vauxhall 30/98 OE, the McLaren F1 of its era, with elegant Mulliner two-seater bodywork and a fascinating history that included an epic 4,000-mile journey from Persia to Manchester in 1930. A wonderful ‘driver quality’ example with oodles of time-worn patina, it richly deserved the £185,000 required to secure it by a private English buyer in the room. Next best was a spectacular 1961 Jaguar XK150S 3.4 Fixed Head Coupe which fetched a remarkable £107,500 – about one third more than this model would typically fetch thanks to its exceptional originality, good provenance (single family ownership since 1964) and extraordinarily low mileage (19,600). Truly a car that anyone would feel privileged to own.

A fully restored 1966 Austin-Healey 3000 MkIII BJ8 amply justified its long journey to the sale from the north of Scotland by fetching £60,500 and is now on its way to a new home at the other end of the country in Kent. However, this is a mere walk in the park compared to the journey that awaits the 1960 Bristol 406. One of only 175 made and perhaps 52 surviving, it was hotly contested to a £41,250 finish and will soon be gracing the roads on the far side of the planet in Tasmania. Much-admired during the viewing was a smart Bahama Yellow 1969 Porsche 912 Targa which looked good value at £29,150 compared to its more illustrious six-cylinder 911 sibling.

Pre-war cars always do well at Brightwells and all but six of the 24 on offer were successfully hammered away, perhaps the most noteworthy result going to the oldest car in the sale, a fabulous 1909 Maudslay 17hp Two-Seat Open Tourer. Believed to be the earliest surviving example and fresh to the market after 50-year ownership, it smashed its £35k bottom estimate to finish on £59,400, the winning Lancastrian bidder fighting off some tough opposition from New Zealand to keep the car in the land of its birth. Not far behind was a huge, and hugely impressive 1938 Packard Super Eight Coupe Roadster, believed to be the sole survivor and in rare RHD which fetched a mid-estimate £52,800. An imposing 1927 Austin 20/4 Tourer almost doubled its pre-sale estimate to finish on £25,300 while a super-rare 1935 Railton Straight Eight Sports Cabriolet raised £29,150. A 1928 Anzani-engined Morgan Aero three-wheeler cost its new German owner £23,100 to secure it, while a pair of Alvises also did well, a 1951 TA 21 Drophead fetching £34,100 and a 1932 TJ 12/50 with bespoke aluminium bodywork making £21,120.

Series Land Rovers are normally well represented at Brightwells so it was most unusual to see only three on offer, but all were sold and it was no surprise that the exceedingly rare and desirable 1950 Tickford Station Wagon, one of only 650 made and formerly part of the Nick Baldwin collection, comfortably trounced the others to finish on an impressive £47,850. The American equivalent, a 1942 Ford GPW Jeep ‘transitional model’ on a Willys frame was also successfully hammered away for £24,750.

To view the results of the July sale in full, please HERE. Brightwells’ next Leominster Classic & Vintage sale is on 4th September 2019 and entries are now being invited with free valuations available by emailing [email protected] The closing date is Friday 9th August so please do not leave it until the last minute or your entry may have to be deferred until our 27th November sale. 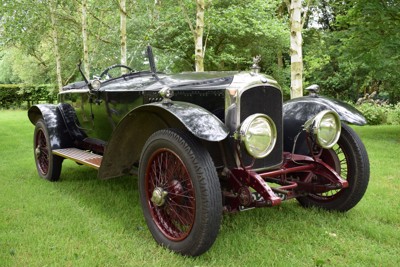